It is uncommon to common in wetter parts of its range, scarce and patchily distributed in driest parts of range. Usually in pairs or small flocks, occasionally large flocks or aggregations up to 5,000 in non-breeding season especially at pine plantations. It has declined in the last 50 years due to habitat loss and destruction, especially large-scale clearing in much of the wheatbelt and Banksia and Tuart woodlands on the Swan Coastal Plain.

Like male but differs in having the ear coverts yellowish white; bill greyish white or grey with a black tip and eye skin grey. Upper bill broader and shorter than Baudin's Cockatoo.

Mainly in wheatbelt, in hollows of old smooth-barked eucalypts including Salmon Gum and Wandoo. Also Tuart, Flooded Gum and Karri as well as Bullich and Marri. Eggs laid on wood dust or chips at bottom of hollow from early July to December. Clutch 1–2 (usually only one young reared) and only the female incubates and broods the chick.

Threats to the species:

Direct causes of population decline include land clearing and fragmentation of habitat (especially in wheatbelt), the loss of hollow-bearing trees and impact of climate change and of hollow competitors including Galah, corellas and feral European honey bee, also fires and vehicle strikes. 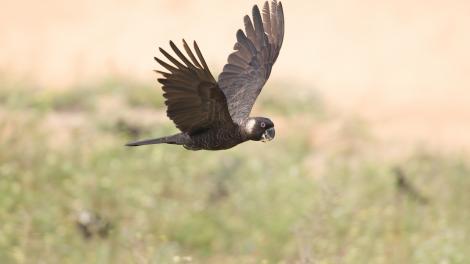