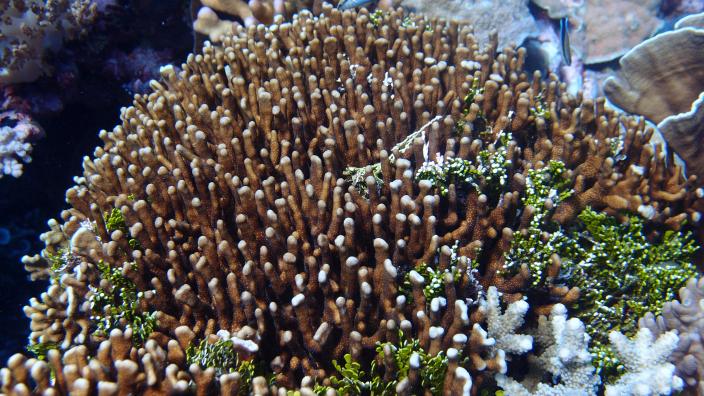 A team of scientists from the Western Australian Museum and universities in Australia and Japan has discovered a new species of coral in waters off the coast of north western WA, offering insight into which coral species are adapting in areas where climate change has had a severe impact.

Heliopora hiberniana, named after the Hibernia Reef in the Kimberley region in which it was found, is a new species of reef-building Octocoral from a family of corals that are commonly called blue coral. This discovery is significant as the highly conserved blue coral family has not changed since the Cretaceous period about 66 million years ago.

Dr Zoe Richards, Research Associate at the WA Museum and Research Fellow with Curtin University, and WA Museum colleague and Senior Research Scientist Dr Nerida Wilson, were part of the research team that made the discovery.

Dr Richards said the species was discovered in part of the world where climate change has severely disturbed the scleractinan or hard coral communities.

“Coral reefs are the most diverse ecosystems on the planet. However, climate change and widespread bleaching events over the last two decades have caused hard corals to retreat, threatening to destabilise critical biological and ecosystem functions such as reef building,” Dr Richards said.

“Field observations indicate that individuals of the new species were intact at Scott Reef after the 2016 thermal stress event. This raises the possibility that bleaching resistant non-scleractinan reef-builders such as blue coral could provide new ecological opportunities for future reefs by filling empty niches left by retreating hard corals and by performing critical functions to help secure the future of coral reef ecosystems.”

The researchers noted the two species of blue coral are readily identifiable from one another as the new species, Heliopora hiberniana, has a white skeleton and the original species, Heliopora coerulea, has a blue skeleton. Dr Richards believes this discovery will continue to help researchers further explore the changes that are predicted to occur in coral reef ecosystems in the future.

The WA Museum’s Executive Director of Collections and Research, Diana Jones, said this new discovery was made possible by the Woodside Collection Project, which is currently in its 20th year. Since it began, the Project has collected more than 55,000 marine animal and plant specimens, and discovered more than 1,000 species new to science. It was also supported by the Gorgon Barrow Island Net Conservation Benefits fund.

“The partnership between Woodside and the WA Museum has amassed the Woodside Collection representing a perpetual and key regional biodiversity repository in a global context. The scientists involved have collected material from more than 476,000 square kilometers in the Dampier Archipelago and Kimberley waters. It is a truly impressive collection relevant not just to the future of the Indian Ocean, but the whole of the vast tropical Indo-Pacific region, from the eastern coast of Africa, across the Indian and Pacific Oceans to Hawaii,” Ms Jones said.

The complete report, Integrated evidence reveals a new species in the ancient blue coral genus Heliopora (Octocorallia), was authored by Dr Richards and Dr Wilson in collaboration with Dr Nina Yasuda and Dr Taisei Kikuchi from the University of Miyazaki, Dr Taryn Foster from the Australian Institute of Marine Science, Chika Mitsuyuki and Yoshihisa Suyama from Tohoku University and Dr Michael Stat from Macquarie University.

The full scientific paper was recently published in Scientific Reports and can be found at: https://rdcu.be/96JE