Innovation and inspiration from the Roman Empire 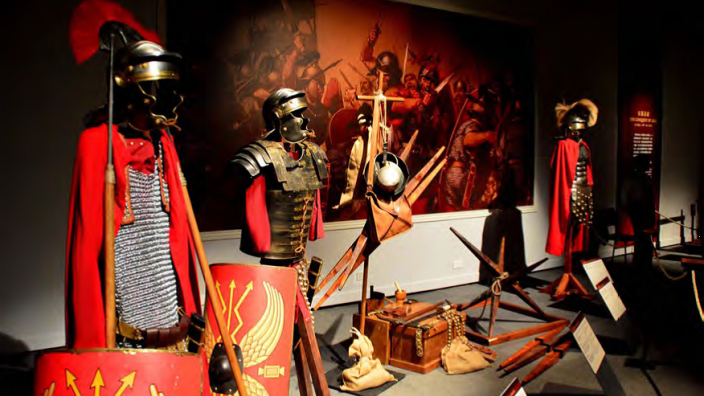 An exhibition that transports visitors back more than 2,000 years to one of the most technologically significant times in the history of the western world opens at the WA Maritime Museum this Saturday, 7 December.

“Through meticulously reconstructed technology and machinery, Ancient Rome begins with the victory by Julius Caesar and his army over the Gauls in 52BC. It then charts the transformation of the Roman Republic (509BC – 27BC) into the immense Roman Empire (27BC – AD476),” Mr Coles said.

“The exhibition includes a model of an onager (catapult) capable of hurling boulders weighing up to 50 kilograms with a maximum range of 500 meters. All models are to scale and include aspects of Roman life, engineering instruments used to construct roads and aqueducts, and logistical equipment of war – some of this technology is still in use today.”

Ancient Rome: Epic innovators and engineers is the creation of Artisans of Florence – International in conjunction with artisans from the Niccolai Group in Florence, under the auspices of the Sapienza University of Rome. The exhibition received the Italian President’s award for cultural innovation in 2010.

With more than 100 years of experience in hand crafting historical exhibitions, Artisans of Florence exhibition curator Thomas Rizzo said it is important for modern-day artisans to keep the technology and machines of the Romans alive.

“Most Roman technology was constructed from perishable materials such as wood, which often did not survive a period of 2,000 years. In order to reconstruct these instruments and technology, we relied heavily on archaeological expertise and information, and the famous work of first century BC engineer Marcus Vitruvius Pollio, De Architectura,” Mr Rizzo said.

“We also relied on the expertise of craftsmen who were taught their skills exclusively, over many generations.”

Tickets to Ancient Rome: Epic innovators and engineers can be purchased through museum.wa.gov.au.

The exhibition opens at the WA Maritime Museum, Fremantle, on Saturday 7 December. Floor talks by Mr Rizzo will be conducted this weekend, 7 and 8 December, at 11am and 2pm both days.