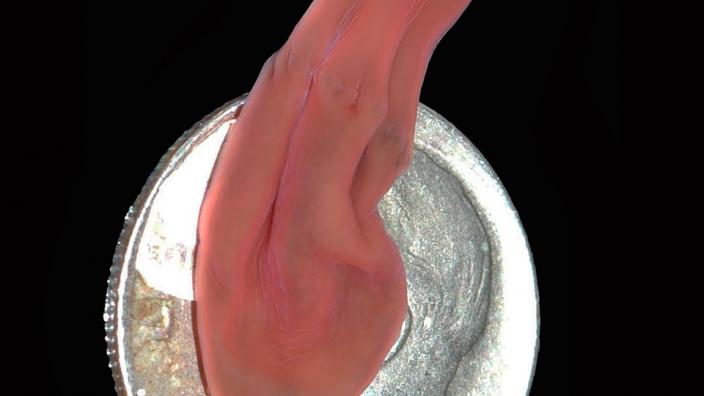 Four new species of Xenoturbella have been discovered living in the deep waters of the eastern Pacific Ocean by a team of scientists from the Western Australian Museum, Scripps Institution of Oceanography, and the Monterey Bay Aquarium & Research Institute in the United States.

Looking a little like empty socks that crawl along the ocean floor, these enigmatic creatures have puzzled scientists for decades. This study reports three large species measuring up to 20cm found at depths between 3,700m and 1,700m, while a smaller species measuring 2.5cm long was found at 631m. The species were discovered off the Pacific coasts of California and Mexico using Remotely Operated Vehicles.

Western Australian Museum senior research scientist Dr Nerida Wilson said Xenoturbella is a phylum of animals that was previously thought to contain just one species, known only from Europe. Little was known about it other than it ate molluscs and, in fact, at one point was thought to be a mollusc because it retained molluscan DNA in its body. The animal is so obscure it doesn’t yet have a common name.

“It was first described as a flatworm, and then confused with molluscs for a while. Increasingly sophisticated DNA analyses placed them as closely related to Deuterostomes (which include sea urchins, sea squirts, and humans), or to being closely related to Acoel worms,” Dr Wilson said.

“Our results confirm that Xenoturbella are closely related to Acoels, and that together these are the sister group to both Deuterostomes and Protostomes (which include arthropods, molluscs and annelids). This means that the basic body features they have were always simple, and not secondarily simplified over time. This helps us interpret how complex features evolve.”

Dr Wilson has previously worked with colleagues from the Scripps Institution on the discovery of a new species of seadragon located off the coast of Western Australia: http://museum.wa.gov.au/research/collections/aquatic-zoology/fish-ichthyology-section/meet-ruby-wa-s-new-seadragon-discovery-s-been-100-years-making

She says the discovery of four new Xenoturbella species, while not yet known from Western Australia, is very significant for science.

“This clearly shows the continued need to keep exploring our oceans, as there are still many exciting discoveries to be made, which can add real value to our understanding of the tree of life,” Dr Wilson said. Her co-author Greg Rouse from Scripps Institution of Oceanography predicts many more Xenoturbella will be found in the world’s oceans.