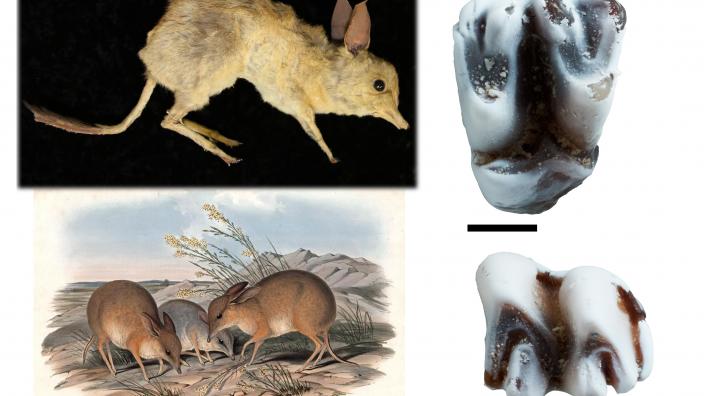 A Western Australian Museum-led study has discovered the oldest fossil remains of a new species of Pig-footed Bandicoot that lived in south west New South Wales between 2.5 and 3 million years ago.

Dr Kenny Travouillon, Curator of Mammalogy, said that this is a very important discovery because we have no fossil record of the pig-footed bandicoot family (Chaeropodidae) prior to the modern species. “We know from analysis of its DNA, that the family of the Pig-footed Bandicoot, Chaeropus ecaudatus, evolved and diverged from other bandicoots (family Peramelidae) and bilbies (family Thylacomyidae) around 30 million years ago, yet we haven’t found any fossils of its ancestors until now,” he said.

The Pig-footed Bandicoot, Chaeropus ecaudatus, is one of the most enigmatic Australian marsupials which went extinct in the late 1950s as a result of competition and predation by introduced species and change in fire regime. It is one of the 30 species of mammals that went extinct in Australia after European settlement.

The new species (named Baynes’ Pig-footed Bandicoot (Chaeropus baynesi), after Dr Travouillon’s fellow palaeontologist and research associate at the Western Australian Museum, Dr Alexander Baynes) is represented by only three teeth, which were collected from the Fisherman’s Cliff fossil site by L.G. Marshall in the 1970s, “It’s pretty amazing how much we can tell from only a few teeth. Mammal teeth are like digital print, you tell species apart from one another, what other species they are related to and also what the animal ate,” said Dr Travouillon.

“Despite only three teeth recovered for Baynes’ Pig-footed Bandicoot, it tells us a lot about the evolution of the pig-footed bandicoot family. It shows that unlike the modern species, it was not a grazer (animal that fed on grass), and suggests that it evolved rapidly the ability to eat grass as a result of drying conditions and changes in environments in the last 2 million years in Australia.”

The Pig-footed Bandicoot (Chaeropus ecaudatus) is the smallest known grazing mammal known to have existed, weighing between 200-300 grams. Grazing mammals, such as cows and deer, are usually very large because this low energy diet requires eating a large amount of grass and a gut fermentation process.

The full texts of Dr Travouillon’s studies can be found here: http://rsos.royalsocietypublishing.org/, and he is available for interview.