On 3 November 1987 the Western Australian Museum received a preserved snake from Mr D.J. Phillips, Government Conservator, Australian National Parks and Wildlife Service on Christmas Island. Since then another specimcl has been forwarded and, according to Mr Phillips (in litt. 26.11.87), another has been seen. Both specimens are Wolf or House snakes (Lycodon aulicus) a species which ranges from India south and east to Timor and the Philippines (M.A. Smith 1943). They belong to the South-East Asian race L. a. capucinus.

Cogger et al. (1983) did not collect this species during their work on the island in 1979. Neither did Or J.N. Dunlop who spent 18 months there working for the Australian National Park and Wildlife Service, including an extensive reptile trapping programme. This and the fact that all three records are from the port area suggest the introduction oc:urred between April 1987 when Dunlop left and October 1987 when the first specimen was collected.

The 'East Crystal' is the regular supply ship for the island. It calls from Singapore every two to three weeks, and in the past has back-loaded phosphate to Indonesia and Malaysia (recently mostly the latter). The only other vessels to call in 1987 were two Australian Navy ships the 'Derwent' and the 'Swan' (June July) and a private vessel in September (J,N. Dunlop pers. comm.).

Lycodan aulicus lays 3-11 eggs, possibly breeds twice a year, is arboreal and lives on geckos, skinks and small mammals (M.A. Smith 1943). With these attributes it could pose a threat to the island's small vertebrate fauna, especially the five species of endemic reptile (loc. cit.) and the Christmas Island Shrew (Crocidura attenuata trichura). It is impossible to predict what might happen should it become established. At worst it could be as catastrophic as the introduction to Guam of the Cat Snake (Boiga irregularis) which apparently was a major factor in the virtual extinction of most of Guam's native birds (Fritz and Scott 1986). The remainder of the Western Australian Museum's Christmas Island reptile collection comprises Cyrtodactylus sp. (19 specimens), Hemidactylus frenatus (7), Lepidodactylus listeri: (1), Cryptoblepharus egeriae (3), Emoia nativitatis (16), Emoia atrocostata (1) and 'Ramphotyphrops', exocoeti (1). 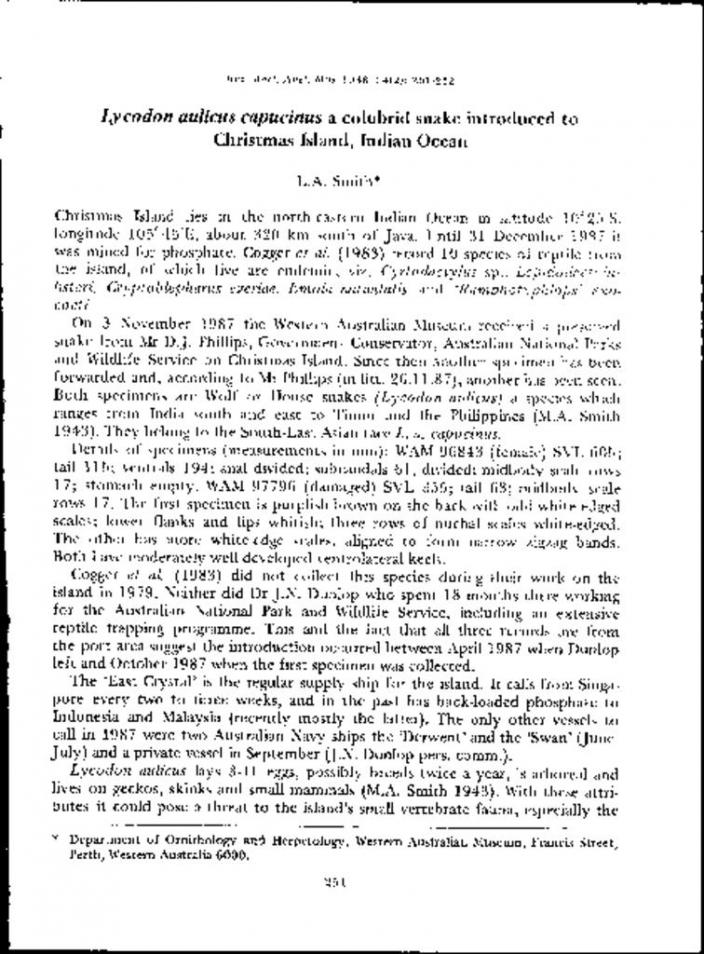