ABSTRACT – Ground-dwelling beetles were sampled by pitfall traps at 304 quadrats positioned to represent the geomorphic extent and profile of the Pilbara Region, a semi-tropical arid region in north-west Western Australia. For each quadrat, 47 climatic, soil, landform, geological and vegetation attributes were determined. A total of 429 taxa across the Bolboceratidae, Carabidae, Hybosoridae, Scarabaeidae and Tenebrionidae were identified, of which 68% could not be assigned to currently recognised species.

Species richness ranged from 1 to 36 species per quadrat, with an average of 11.6±5.9 species (n = 296 quadrats). Species recorded at one quadrat only (‘singletons’) constituted 33% of the fauna and were collected mainly from areas near the edge of the region or were associated with the Fortescue subregion; they included 36% of the Bolboceratidae (8 species), 32% of the Carabidae (72 species), 33% of the Hybosoridae (2 species), 46% of the Scarabaeidae (45 species) and 22% of the Tenebrionidae (17 species). Those from the region’s edge may have their distributions centred elsewhere, while singletons from the Fortescue subregion may be restricted to marsh habitats that are rare elsewhere in the region.

Localised evolutionary processes associated with and promoting low mobility have resulted in fauna with a high proportion of strongly-localised endemic forms. Detailed comparisons of the beetle fauna with neighbouring semi-arid areas such as the Great and Little Sandy Deserts, Ashburton and Northern Carnarvon Basin are required to determine phylogenetic relationships between taxa, distributions, and to explore further the correlation of species composition with various land attributes that have emerged from our analysis. 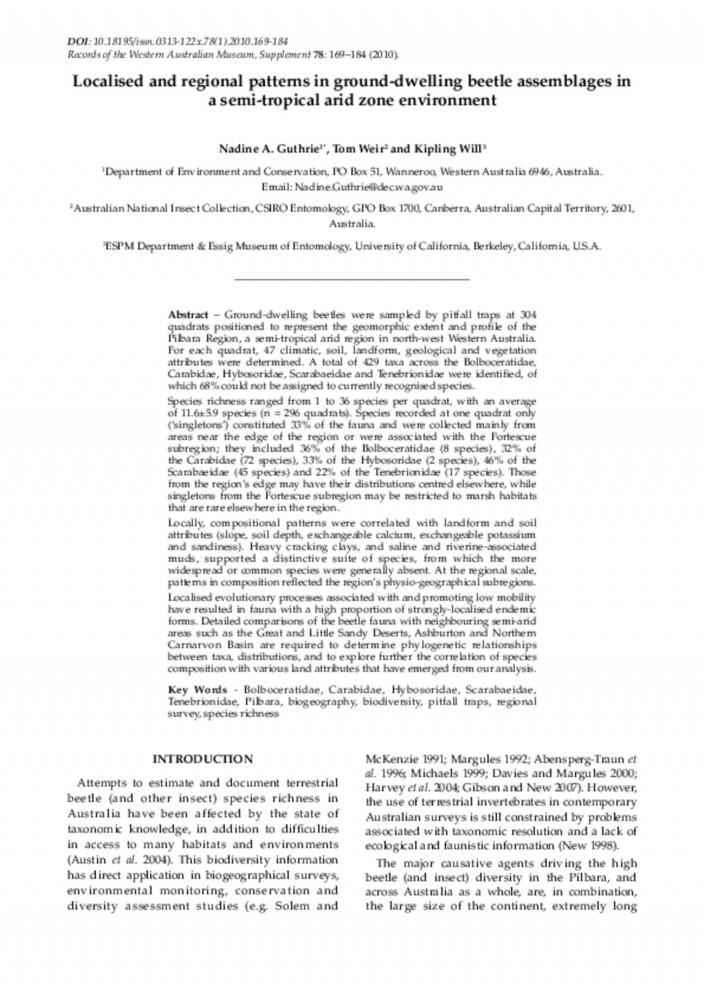 ORDER A COPY OF THE COMPLETE VOLUME
Supplement 78 (Part 1): A biodiversity survey of the Pilbara Region of Western Australia 2002–2007