GROOVED AUSTRALITE FROM THE VICINITY OF CORRIGIN, WESTERN AUSTRALIA

FULLT TEXT: An australite found in south-western Australia has a groove encircling the extant portion of the anterior surface (Figure I H, C). The find site of the australite was somewhere within the Shire of Corrigin, which is centered upon the town of that name, located at 32°20'S, 117°52'E.

The specimen was a round or slightly oval core, the original shape now uncertain because of an old, natural, flake loss (Figure lA, D). Dimensions are (23.7-21.9) mm diameter X 15.6 mm thick, mass 9.67 g, and specific gravity 2.45. All surfaces, including flake scars and the groove, are pitted or otherwise affected by weathering. The well-rounded rim is in the usual position at the greatest diameter of the core, and the surface profile anterior to it is gently convex (Figure 2A, H). These features contrast with the sharper rim and adjacent concavity of a typical core (Figure 2e). A few very small U-grooves (0.2-0.6 mm wide, 0.4-1.0 mm long) are present immediately anterior to the rim, and are oriented normal to it (Figure IC). Grooves of that type and orientation, but usually several millimetres long, are commonly developed by weathering anterior to a rim i.e. at the rear edge of a surface created by loss of an aerothermal stress shell.

A much larger groove (> I mm wide, 0.2 mm deep, with gently concave cross section), is centered 3-4 mm anterior to the rim and sub-parallel with it. This groove encircles the australite except in a gap of ca. 90°, where there is a large, deeply-etched, flake scar (Figure I D). Very small U-grooves (0.2-0.4 mm wide, up to 0.6 mm long) are present in places within the large groove and are oriented transverse to it (Figure IC). Anterior to the large groove, the profile is again convex. The general form of the anterior surface is thus constricted at the groove but gently bulging on each side of it (Figure I H; 2A, H).

Primary processes of australite formation can explain the various forms of posterior surface as remnants of the surfaces of spherical or rotating masses of melt, but they cannot explain surface features such as this groove occurring elsewhere. Terrestrial ("tertiary") weathering processes have created pits impartially within the groove and on other parts of the surface, thereby indicating that the groove was present prior to weathering. The origin of the groove therefore needs to be sought in the intervening secondary (aerodynamic) shaping period.

Profiles of the australite as far rearward as the points Q (Figure 2A, H) resemble the complete anterior profile of a typical core (Figure 2C), but no rim is present at Q, and it needs to be assumed that the small U-grooves have the same significance as the usual much larger ones. There appear to have been two separate stages or episodes of spalling of the stress shell, neither leading to development of a typical rim. The only recorded example of an australite with two rims was found west of Ravensthorpe, 220 km south-east of Corrigin (Cleverly 1987). On that specimen, the rims are only I mm apart, but on the Corrigin core, the rim and the more anterior potential rim site are 3-4 mm apart. The more anterior rim is undeveloped (or lost?), and the other is atypical.

FIGURE 1 (found in PDF): Australite from vicinity of Corrigin, Western Australia. All views x2. A. Posterior surface with large flake loss to right. B. View normal to line of flight which is directed towards bottom of page. In this view, the groove (below centre) may appear to be emphasized as the result of relief inversion. C. View obliquely "upward" showing anterior surface with groove, small U-grooves at rear (upper) edge and minute U-grooves in the large groove towards upper right. Pale, narrow, lunate strip above is posterior surface. D. Anterior surface. Narrow, circumferential, flange-like strip is the part of the anterior surface posterior to the groove, which appears as a pale narrow strip. Flake loss to right.

Certain other peculiarities of australites found in south-western Australia are already known. One feature is the irregular curvature, or almost faceted shape of the posterior surfaces of certain cores (Chapman 1964). Another peculiarity is the irregular outline of the stress shell detached from very large cores (Cleverly 1981).

A referee of this paper has kindly drawn my attention to his descriptions of composite Ivory Coast microtektites formed by fusion together of two or more individuals, and having encircling V-grooves developed by solution around the junctions (Glass 1974). The Corrigin specimen has been re-examined, and its origin in that way is believed to be unlikely. It would need to have occurred in the primary developmental stage during flight. The origin of the groove is thought to be, more probably, related to aerodynamic effects.

The necessary circumstances of formation are evidently rare, as I have seen no other feature comparable with the groove during my examination of an estimated 60000 australites from numerous and widespread localities. The groove remains with the irregularly curved posterior surfaces of certain cores, the unusual outlines of some stress shells, and the double rim of the Ravensthorpe specimen as one of the peculiarities of australites found in south-western Australia.

FIGURE 2 (found in PDF): A and B. Partial profiles of australite viewed normal to line of flight. The rim R separates posterior surface above (up page) from anterior surface below. F is a shallow flake loss. Qis the rear limit of the groove. C. Analogous partial profile of typical core. Not to scale. 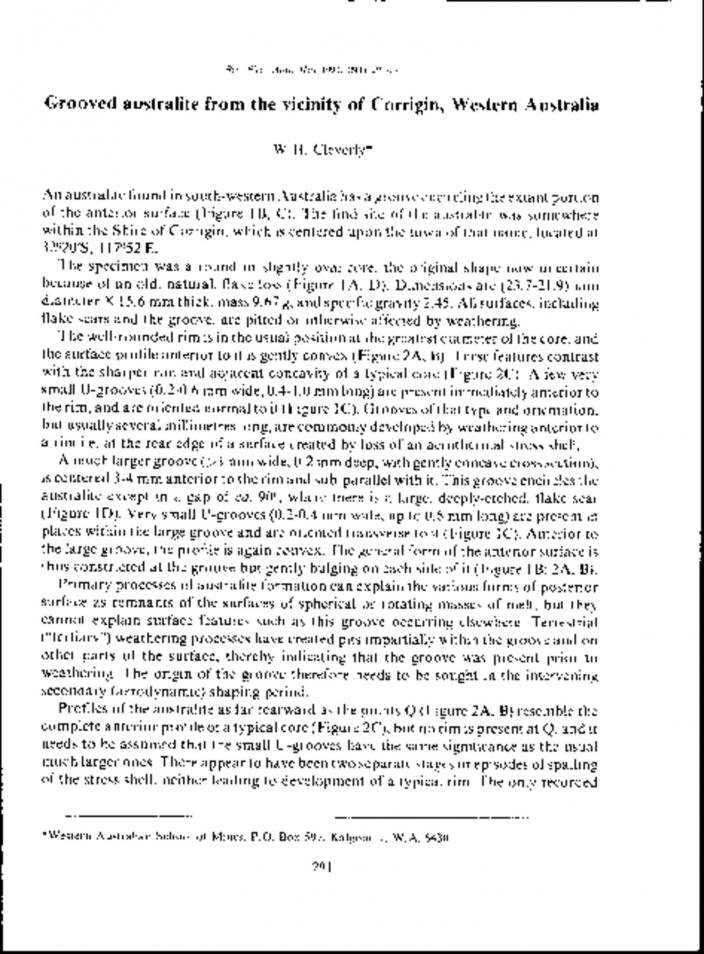 GROOVED AUSTRALITE FROM THE VICINITY OF CORRIGIN, WESTERN AUSTRALIA