This ground-dwelling species has a robust, somewhat flattened body, and small head and short limbs. The back has a warty appearance and is mottled with browns and greys. A bar between the eyes and an X above the shoulders are often visible. The belly is boldly blotched with black on a white background. There are two large tubercles on the hind feet. They attain a maximum length of 3.5 cm. Female Crawling Frogs are generally larger and stouter than males.


Breeding begins with the first rains in autumn and continues through to early winter. As with the unrelated Heleioporus species, male Crawling Frogs excavate a burrow by which they call to attract a female. Most mating and egg-laying take place before there is water in the ponds and creek lines where they breed.

As many as 100 relatively large eggs are laid singly in damp depressions or burrows excavated by the males. Males can often be found on a pile of eggs, but these are likely from many females. The males do not actively 'guard' the egg pile. The eggs will develop up to a point (stage 28) then suspend development. The eggs hatch when winter rains fill ponds and creeks and eventually flood the burrows. The tadpoles then hatch out and begin to swim and feed in the water body.

Tadpoles of this species are pear-shaped with the tail length about one and a half times that of the body. The body is mottled with brown and grey in a variety of patterns. Tadpoles attain a maximum length of about 3 cm.


Generally occurs in low-lying areas with moisture. Found in small damp depressions beneath rocks, fallen timber or in shallow burrows amongst leaf litter or fringing vegetation.


Named after Albert Gunther of the British Museum who named many species of Australian frogs and reptiles.


This species sometimes comes in to contact with Western Toadlet, from which it can be distinguished by its much larger digging tubercles on the feet. 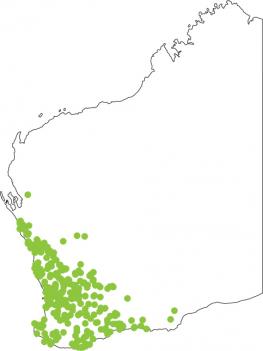 The Crawling frog is found from Kalbarri to Esperance and inland areas that receive reliable winter rains. In the Perth metropolitan region it has been recorded along the Swan, Canning and Murray Rivers.

The call is a short, sharp, grating sound repeated frequently. Male Crawling Frogs usually call in a shallow burrow beneath litter or vegetation, alongside a stream or swamp in low-lying areas .