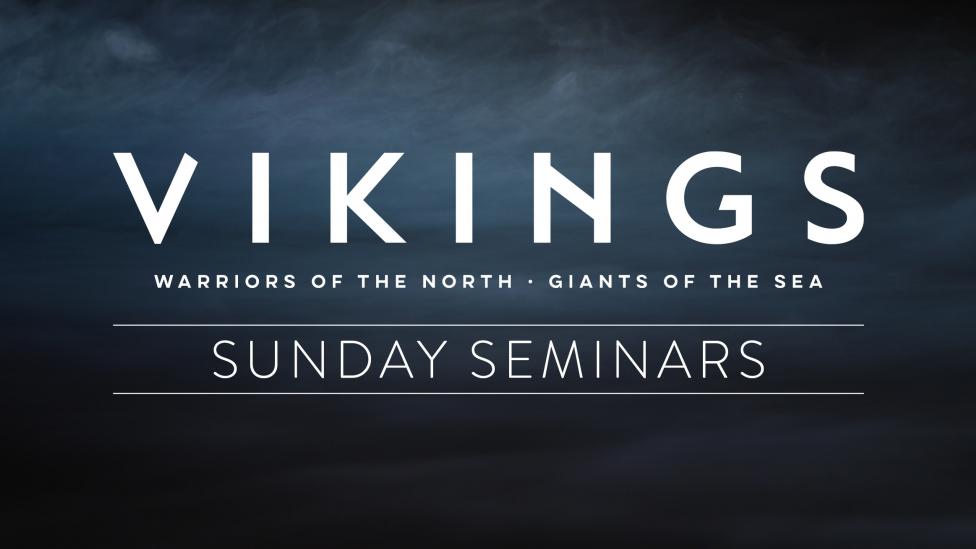 Visit us at 2.00pm on Sundays in March for our free Vikings Sunday Seminars series.

Free events.  Admission fees apply for Maritime Museum and Vikings: Warriors of the North, Giants of the Sea exhibition.

Join Alistair Paterson as he discusses the archaeological evidence for the Norse in the northern Atlantic Ocean and the evidence for various cultures they came into contact with from North America, Greenland and elsewhere.

The Vikings were supremely skilled mariners and bold explorers, whose journeys redefined the impact of the Viking Age beyond Europe. How does this evidence update our understanding of the Vikings and the people they met?

Susan’s artwork - including the figure ‘Shimmer’ which stands opposite the Fremantle train station - draws on pre-Modern mythology and weaves beautiful beasts into her own visual language. This conversation will explore the relevance of these particular animal motifs and symbols to current global environmental conditions.

Join Andrew Broertjes as he examines how the Vikings and Viking iconography have been represented - and misrepresented - in popular culture from the medieval period to the present.

From the medieval Icelandic sagas to Wagner, from Marvel comics to Game of Thrones, Vikings have held a special place in the stories we read, and the television and cinema we view. Whether as legendary warriors, pirate raiders, or barbarian savages, the dense mythology surrounding the Vikings has been shaped through many layers of time and popular imagination.

Join Georgina Pitt as she explores medieval Viking strategies of warfare and the response to them in England and on the Continent.

Vikings were exceptional and highly organised warriors, with initial tactics of swift and brutal raiding in Anglo-Saxon England from around 800 CE evolving later towards conquest of its kingdoms. Wessex was the only Anglo-Saxon kingdom to withstand the Viking onslaught.

What made the Vikings such a formidable fighting force? Why did all the other Anglo-Saxon kingdoms fall to them? The king of Wessex, known later as Alfred ‘the Great’, devised a novel defence-in-depth system which specifically countered the fast-moving Viking method of waging war. Implementing this system required a huge communal effort from his people. Defending against the Viking challenge changed the Anglo-Saxon landscape, and changed the way the Anglo-Saxon people thought about themselves.

Prof Alistair Paterson - ARC Future Fellow in Archaeology, The University of Western Australia.
Prof Alistair Paterson’s research examines the historical archaeology of colonial coastal contact and settlement in Australia’s Northwest and the Indian Ocean. His key interests are Western Australia and Indian Ocean history, Aboriginal Australia, Dutch East India Company, colonialism and exploration, rock art, and the history of collecting in Western Australia.  Alistair is committed to the roles that universities and other cultural institutions in making the world more understandable. He is currently lead investigator on several ARC projects: (1) Collecting the West: Reimagining Western Australia from its collections; (2) Coastal Connections: dynamic societies of Australia's Northwest frontier and (3) Collecting at the Crossroads: Anthropology, Art & Cultural Change (1939-85).

Louise Dickmann – Collection Coordinator, Janet Holmes à Court Collection
Louise worked as a Lecturer at Central TAFE (2003 – 2017) and as an Art Consultant, then Manager of Membership Services, at Artsource (2007 – 2012). In 2018, she began working in collection care roles, as Curator of the City of Joondalup art collection and Assistant at the Berndt Museum of Anthropology at UWA (2018 - 2019). Louise now works as the Collection Coordinator at the Janet Holmes à Court Collection.

Susan Flavell - Artist
Susan is a visual artist whose work deals with animal and human forms: the real, the hybrid, the fantastic, the monstrous and mythical. These interests come from her childhood, with her family life commencing in the Middle East, and with her sister born in Cyprus. Susan’s earliest memories are of Central America, of temples, jungles and beautiful animals. Sculpture and objects that sit in the world with us are her creative obsession.

Georgina Pitt – Phd Candidate in History, The University of Western Australia
Georgina Pitt was a litigation lawyer for 20 years before deciding to go back to university and have some fun. She is currently a PhD candidate in the History Department at the University of Western Australia, with a research focus on the Anglo-Saxon period in Britain, from the end of the Romans to the arrival of the storming Normans. Her research methodology is interdisciplinary, covering literature, history and archaeology. Georgina has published on the famous Sutton Hoo ship-burial in the journal Parergon, and co-authored a study on the literatures of war in the Routledge History of Emotions in Europe. She is currently working on essays for publication on the Alfred Jewel and on Alfred’s military reforms.
When not immersed in history, Georgina also runs a cattle farm with her husband on the south coast of WA. All of her bulls have been named for Roman emperors or philosophers, until the good ones good ones ran out. (You can’t name a bull after the mad and bad emperors such as Nero or Caligula!) Recent namings have just commenced using the Anglo-Saxon names, beginning with the greatest of them - Alfred, of course!