A small ground-dwelling frog (to 2.5 cm). The skin on the back may be smooth or consist of a number of bumps or longitudinal ridges. The back is rarely uniform in colour and usually shows a complex pattern of dark and light brown with grey blotches and/or stripes. The belly in both sexes is marbled grey and white with a granular texture. Males can be distinguished by a dark edging around the margin of the lower jaw.


Breeding takes place during the wet late autumn and winter months, but some males continue to call in late spring. Males often call from fairly exposed positions either in or alongside open water, but can also be found calling from dense vegetation in marshes and soaks. Eggs are laid singly or in small clumps in shallow water where they sink to the bottom. They often acquire a fine coat of mud, making then difficult to locate.

Tadpoles of this species are very similar to those of the Bleating Froglet in appearance and can only be separated reliably by geographic location. Colour is a mottling of brown and grey with occasional white flecks. The tip of the tail is broadly rounded (not as contracted as in Clicking Froglet tadpoles). Tadpoles of the Squelching Froglet are usually found in the shallows of permanent and temporary water. During the day they remain still on the bottom, but they will quickly bury themselves in sediment if disturbed. Larval life is about 2 months.


The species name refers to Crinia signifera from south-eastern Australia. There are few morphological differences between the species, therefore the name means 'inside signifera'.


Squelching Froglets are one of the more common frogs on the Swan Coastal Plain, with the highest populations found around many of the larger, more permanent water bodies such as Herdsman, Parry, Piney and Bibra Lakes. The noise produced by a breeding chorus of many hundreds of squelching froglets can be heard over a considerable distance. Although they can be hugely abundant around wetland areas, Squelching Froglets do not appear to move any great distance from their breeding areas. They may interbreed with the closely related Bleating Froglet where two species abut (where the Coastal Plain meets the Perth Hills). 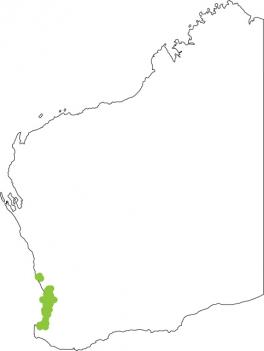 Restricted to the Swan Coastal Plain from Gingin in the north to Busselton in the south. Also on Rottnest Island in low numbers.

A 'squelch' sound ('like drawing a wet finger over a balloon' - Bert Main).