The build is robust and the limbs are relatively short. Maximum length is around 6 cm. The back is brown to dark grey with a mottling of white or grey (no yellow as in moaning frogs). Pale coloured tubercles (bumps) are usually present on the lower flanks. Males possess the nuptial spines that the similar-looking Moaning Frog (H. eyrei) males lack, although southern populations of the Sand Frog also lack the spines.


The males, like all members of the genus Heleioporus, burrow in low-lying areas which become inundated after autumn and winter rains. Males call from within the burrow to attract females after which eggs are deposited at the bottom of the burrows in damp soil. Males only call for a month or so after the first rains in autumn.

The eggs masses are white and foamy, and as many as 200 eggs may be laid in a burrow. Rising water levels of swamps and creeks caused by rain eventually flood the burrows; this allows the newly-developed tadpoles wriggle free of the egg mass and swim out of the burrow.

Sand Frog tadpoles grow to 5 cm; the tail length is only 1.5 X the body length. The body is dark brown to pale grey with a series of thin, light coloured lines on either side. Tadpoles metamorphose during September and October.


This species occurs on white sands (where the scientific name comes from) or clays mainly in Jarrah forest.


psammophilus means 'sand-loving', in reference to this species' preference for sandy soils.


This species can form choruses near other Heleioporus species, but prefers sandy soils. In the southern populations they are very difficult to distinguish from the Moaning Frog (H. eyrei) if they are not calling, as both species lack the nuptial spines in this area. 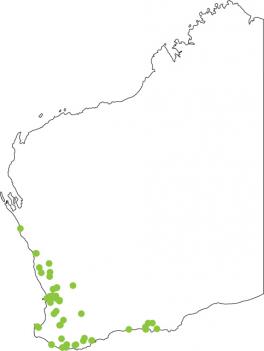 South-western region, especially Darling Range, south-west forests and sandy regions to the north. Found from Geraldton south to Walpole and east to Albany. Not found on the coastal plain apart from a few locations at the base of the Darling Range.

A short, high-pitched 'put-put-put-put' that is repeated rapidly. Sounds like a speeded-up version of Whooping Frog call and has been likened to an outboard motor.