Red-tailed Black Cockatoo.
The south-western population naso (referring to its large bill) was named by John Gould in 1837. Known to the Noongar people as ‘Karrak’.

It was formerly common, but is now rare to uncommon and patchily distributed over a range which has become markedly reduced. Usually seen in pairs or small flocks, seldom large flocks (up to 200). It has declined due to destruction of forests and woodlands, also competition for nest hollows with native and exotic species and the impact of fire. There are three subspecies of Red-tailed Black Cockatoo in Western Australia. Only the south-western population naso is listed as Vulnerable.

Glossy black except for bright orange-red band towards tip of tail, bill dark grey or blackish.

Similar to female except for less pale yellow spots on head, cheeks and wings, dull pale yellow bars on breast and belly, outer tail feathers brightly barred with red or orange red (little or no yellow) and bill dark grey or blackish.

This subspecies occurs in the humid and subhumid south-west; mainly in hilly interior, north to Gingin (formerly to Dandaragan) and east to Mt Helena (formerly to Toodyay), Christmas Tree Well near Brookton, North Bannister (formerly to Wandering), Mt Saddleback, Kojonup, Rocky Gully, upper King River and east to the Green Range. It is endemic to Western Australia.

Nesting in hollows of Marri, Jarrah, Wandoo, Karri and Bullich trees. Eggs laid on wood chips at the bottom of the hollow in March-December; clutch 1 (rarely 2). Incubation period 29–31 days and only the female incubates and broods the chick. Hatchlings covered in sparse yellow down. 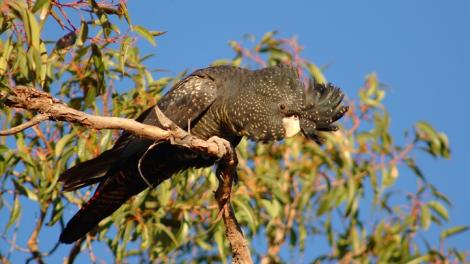