It is scarce to moderately common (most numerous in deep south-west). Mainly in flocks (up to 300 and occasionally larger aggregations of up to 1200 at roosts). It has declined in the last 50 years, its low rate of reproduction (0.6 chick per year) precluding it from replacing the large numbers shot by orchardists. In the last 10 years (since 2016), there has been a dramatic decline in numbers recorded at traditional roosts sites.

Nesting in hollows of Karri, Marri and Wandoo trees. Eggs laid in August - December; clutch 1–2 (only one young reared) and only the female incubates and broods the chick.

Like the male, but differs in having the ear coverts a brighter yellowish white; bill greyish with dark tip and eye skin grey.

The female’s contact call is a short "whicher whicher" or "bunyip bunyip" flock call. The male makes a longer “kurweeeurr” often given as a duet. Breeding call a repeated low "arr" followed by a high-pitched whistle.

Occurs in south-western humid and subhumid zones, north to Gidgegannup, east to Clackline, Wandering, Quindanning, the Perup River, Lake Muir and King River, and west to eastern strip of Swan Coastal Plain including West Midland, Gosnells, Byford, North Dandalup, Yarloop, Wokalup and Bunbury also the Stirling and Porongurup Ranges and along the south coast to Waychinicup National Park. It is endemic to Western Australia.

Southern eucalypt forests of mainly Jarrah, Marri and Karri. Feeds on seeds of eucalypts, Banksia, Hakea and fruiting apples and pears. Also nectar, buds and flowers and strips the bark from dead trees in search of beetle larvae. Forages at all levels from canopy to ground.

Clearing of forest, fires, climate change, vehicle strikes, feral European honey bees which take over nesting hollows and in the past large numbers shot by orchardists. 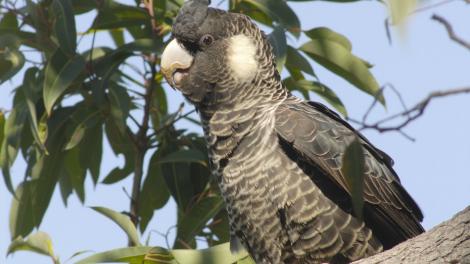