A Descriptive List of a selection of Western Australian Frogs

Western Australia is home to a wide variety of frogs – if you know where to look. The Western Australian Museum hosts a comprehensive website – Alcoa Frog Watch – that explores many of Western Australia’s frog species. In this blog, discover some of the species found in WA’s various regions, from the Kimberley to the South West. Which frog might live near you?

The Kimberley region of north-western WA is a hotbed for frogs, who enjoy living in the sparsely populated Australian Monsoonal Tropics, where they inhabit all kinds of micro-environments, from rocky creeks and Pandanus swamps to road ditches.

Hylids are a particularly common group of frog in this region – otherwise known as tree frogs. There are many species of tree frog, and some are particularly difficult to tell apart.

There is a population of Laughing Frog that resides in Queensland – but Western Australia has its own version of this giggling frog.

The Laughing Tree Frog is a medium sized, mottled frog. Pale-brown skin and black-yellow thigh markings distinguish this frog, which lives in trees and bushes near bodies of water such as Melaleuca swamps.

Tree Frogs aren’t the only amphibian gracing the Kimberley. Many species can be found in ponds and on riverbanks. But some frogs prefer a more crevassed environment.

The Cave Frog is another Kimberley endemic. It occurs in the North West corner because of its rugged, fractured rocky environments and plentiful rainfall in the summer.

This medium sized frog has long hind limbs, green to reddish-brown skin, and is found in caves. It can also be spotted on ledges, sandstone boulders and rock platforms.

This rarely seen frog lives up to its name – cavernicola literally translates to ‘cave-dweller’.

The Giant Frog can grow up to 11 cm, and is a ground-dwelling frog. It will burrow into the soil during the day to escape the sun.

When the wet season starts, the Giant Frog is one of the first frog species to breed. They also eat other frogs, including members of their own species.

The Giant Frog is sometimes confused with the feral Cane Toad, and can be distinguished by its lack of protruding brow ridges.

The Flat-headed Frog has an interesting survival story.

Thought to have become extinct due to the creation of Lake Argyle due to a species misidentification, scientists, researchers and froggers alike were glad to find that the Flat-headed Frog continued to thrive around Kununurra and the Northern Territory.

The Southwest region of WA consists of ancient forests that are refuges for the state’s most endangered frogs. These small populations are threatened by habitat loss, predation by feral species, and many other factors.

The Orange-bellied Frog is a small, muscular frog that lives in very dense swamp vegetation.

The Forest Toadlet is a small frog that tends to crawl rather than hop. Colours range from purple to orange and yellow.

This frog has no tadpole stage – instead, a fully formed baby frog hatches from the egg. Eggs are laid under leaf litter, logs or stones in late summer.

The Turtle Frog is perhaps one of the strangest looking frogs in the world. As its name suggests, this frog looks like a turtle – but with the shell removed.

This burrowing frog employs a neat trick to help speed up the growth process – it skips the tadpole stage entirely, emerging from the egg capsule as a small but fully formed version of its parents.

The Arid Zone frogs are not as well known as their Kimberley and Southwest counterparts, due to the inaccessibility of the desert regions. Most species breed infrequently, when water is plentiful.

These amphibians are true survivors of some of Australia’s harshest habitats.

The Plonking Frog is a robust frog that has five yellow stripes in the shape of a ‘W’ on its back.

This frog breeds in claypans after summer storms, and lay eggs amongst vegetation.

The Wheatbelt Frog has a scientific name that means ‘frog’ in the Gugadja language – Neobatrachus kunapalari.

This frog has protruding eyes, and varies in colouration from pale straw to dark khaki, with blotches of pale to dark brown.

The Wheatbelt Frog is a tetraploid species, which means it has double the number of chromosomes compared to other species of Neobatrachus. 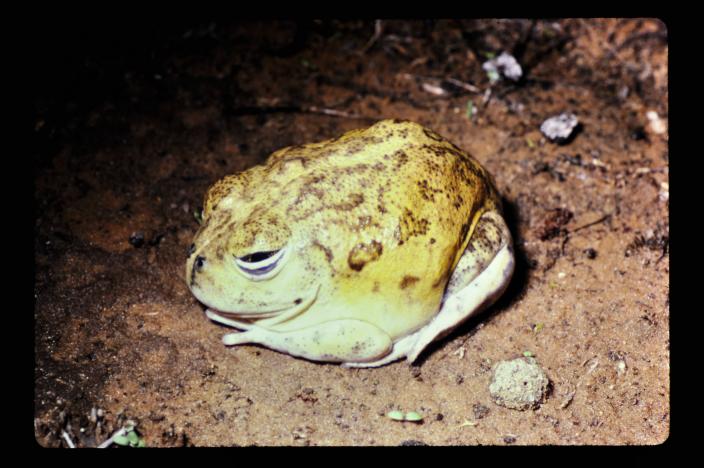 Western Australia is home to an amazing diversity of frog species, many of which are under threat for a variety of reasons.

To find out more about WA’s frogs, watch this lecture by Western Australian Museum Curator of Herpetology Dr Paul Doughty, check out the Frog Watch website, and discover how you can help save WA’s frog species by participating in the Tadpole Exchange Program.