A very peculiar frog with a body shape superficially resembling a small turtle with its shell removed. The head is very small, with reduced eyes, and quite distinct from the body, unlike most other frogs. The limbs are short but muscular, especially the arms. Like its relatives the Sandhill Frogs, this species burrows forwards through the sand, unlike most of arid-adapted burrowing frogs that use their hind feet and descend backwards in to the soil. The back colour ranges from pink to a uniform light to dark brown. This frog grows to 5 cm.


In the Perth region, males call in summer after rain. Further inland, turtle frogs have been heard calling in July, suggesting regional variation in the timing of reproduction. Once a mate has been selected the Turtle Frog couple retire to the base of the burrow which may be as much as 1.2 metres deep. Breeding takes place within the burrow several months later. Females lay up to 50 large eggs, each measuring as much as 7.5 mm in diameter.

There is no tadpole stage as the embryo goes through its entire development in the egg capsule and emerges as a small but fully formed frog.


Found almost exclusively on sandy soils, often associated with termite colonies. This species is one of the few frogs that skips the tadpole stage and can inhabit sandy areas without free standing water.


Turtle Frogs are closely related to the Sandhill Frogs and Forest Toadlet and share direct-developing young and forwards-burrowing habits. 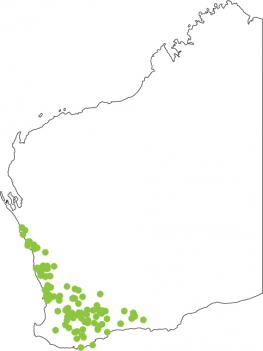 Turtle Frogs are found west of a line drawn between Geraldton in the north and the Fitzgerald River to the south-east. In the Perth region they are relatively common on the coastal plain (e.g. King's and Bold Park), but absent from the Darling Range. Further east, Turtle Frogs are encountered in the gently rolling wheatbelt country.

Deep croaks, made from partway down a breeding burrow. Calling males are extremely difficult to locate.