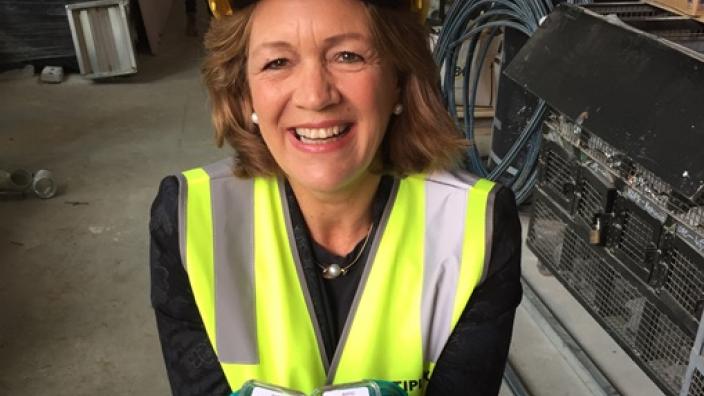 The Ambassador to Australia of the Kingdom of the Netherlands, Her Excellency Mrs Marion Derckx, has taken a hard hat tour of WA’s New Museum site in the Perth Cultural Centre to see first-hand where some of the stories of our significant shared cultural heritage will be on display.

The Netherlands and Australia have always enjoyed a strong relationship when it comes to shared maritime cultural heritage, and the Western Australian Museum is a key partner. The International Programme for Maritime Heritage of the Cultural Heritage Agency of the Netherlands is a main contributor to a range of projects, working closely with the Embassy, the Museum and other Australian partners to ensure effective management of shared Dutch-Australian maritime heritage and its presentation to a wide audience in both countries.

WA Museum CEO Alec Coles said Western Australia and the Netherlands share a compelling history, dating back more than 400 years. Since Dirk Hartog’s landing at Shark Bay in 1616, at least four major Dutch East India Company (VOC) shipwrecks have occurred on the WA coast and these are showcased in the WA Shipwrecks Museum. Some of the more modern stories shared by the two countries will be revealed in the New Museum, in Perth.

“The Museum has always had a strong relationship with the Netherlands. It was cemented with the Australian Netherlands Committee on Old Dutch Shipwrecks (ANCODS) work in the 1970s, and further strengthened in 2017 when both countries signed a Memorandum of Understanding to jointly manage and research shipwrecks, sunken relics and other underwater cultural heritage,” Mr Coles said.

“It is very fitting that our New Museum building is designed by a collaboration between Australian architects HASSELL and Rotterdam-based OMA.”

Ambassador Derckx remarked: “The story of the first Dutch contacts with Australia is fascinating and the WA Museum holds some of the earliest tangible evidence of the centuries-old ties between our countries.”

“I look forward to future collaboration with the WA Museum and to admiring the collection in this impressive new building.”

The Netherlands Embassy has helped fund a range of work on shared cultural heritage projects, the latest of which is a $19,485 grant to make the Museum’s assemblage of 93,000 coins, recovered predominantly from the VOC shipwrecks, more accessible online.

Along with a range of national and international partners, the Embassy and the Cultural Heritage Agency of the Netherlands are also helping to fund the search for nine flying boats belonging to the Dutch navy that were destroyed by Japanese fighter planes off Broome during World War II. The flying boats were carrying Dutch refugees evacuated from Indonesia in the wake of the Japanese advance, when they were attacked. At least 70 people were known to have been killed, including women and children, but the actual death toll is thought to be much higher.

The story of the Japanese attack on Broome and Roebuck Bay will feature in the Tianqi Lithium Connections Gallery in the New Museum.

“The attack on the flying boats at Broome was a devastating human tragedy. This new research will contribute to a better understanding of this episode and to remembering the victims,” said Ambassador Derckx.

Culture and the Arts Minister David Templeman today thanked the Netherlands Embassy for its ongoing support of the Museum and its work sharing the important stories of our shared cultural heritage.

“I would like to congratulate both the Embassy and the Museum for working to ensure this very important cultural partnership continues to thrive, so we can share these very important stories with the people of Western Australian, the Netherlands, and the world,” Mr Templeman said.