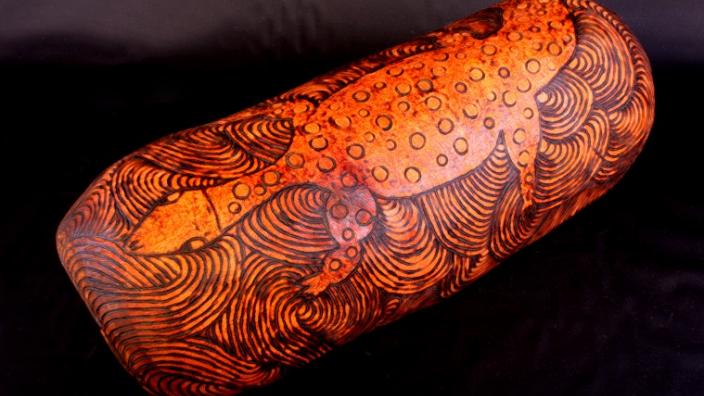 An exhibition celebrating the stories and Law of Anangu culture through intricate carvings and artefacts will go on display at the Museum of the Goldfields next weekend.

Punuku Tjukurpa is the first touring exhibition of artworks from the Maruku Arts archive based at Mutitjulu, near Uluru in the Northern Territory.

“There will be 88 punu (carved objects made of wood), sculptural works, 2D pieces and specially produced audio and video footage on display,” Ms Scott said.

“The mobile app that accompanies the exhibition also provides a deeper engagement with the diverse works through audio descriptions of selected objects, a walking tour and educational activities.”

“Punu is a significant and prolific art form in Central Australia and its production and display are integral to the maintenance of culture, and to the sharing of knowledge,” Ms Partos said.

The title of the exhibition, Punuku Tjukurpa, describes the story and Law behind the works on display.

The exhibition features works made by three generations of artists for whom the tradition of wood carving and painting has been passed down. Artists have shared the teaching of stories that inform the intricate designs and markings incorporated in the objects.

“It is good that our carvings should go out to the world for all to see. This is a good thing. People can see and understand how things are made and that we have a lot of memories [in our collection],” said artist Niningka Lewis.

Selected artworks in Punuku Tjukurpa have been audio described for visitors with visual impairment. Delivered via MP3 players at the Museum, these audio descriptions assist in increasing access to culture and the arts.

Punuku Tjukurpa opens at the Museum of the Goldfields on 18 November and will be on display until 28 January 2018. Entry to the Museum is by donation.

Visitors on the opening day are also welcome to attend a free talk about the exhibition by Punuku Tjukurpa Curator Stephen Fox at 11.30am.

This project has been assisted by the Australian Government through the Australia Council, its arts funding and advisory body.