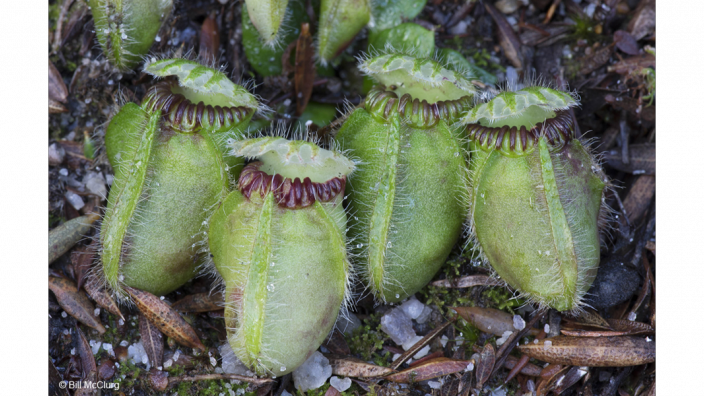 The 2017 Australian Geographic Nature Photographer of the Year collection is now on display at the Museum of the Great Southern.

It includes a visually striking image of a crowd of spider crabs (Leptomithrax gaimardii) and a predatory Maori octopus (Octopus maorum), which is the overall winner of the annual competition run by the South Australian Museum.

“I was out diving on a project with Professor Craig Johnson from the University of Tasmania when suddenly a large aggregation of spider crabs came out of nowhere,” Mr Gilligan said.

“Capturing this shot was a case of being in the right place at the right time. The unexpected encounter really reinforced how little we know about Australia's temperate marine environment. The octopus was behaving like an excited child in a candy store trying to work out which crab to consume – its eyes were definitely bigger than its belly.”

He was also awarded first place in the Botanical and Our Impact categories for more outstanding images.

“The Australian Geographic Nature Photographer of the Year competition continues to grow, with 2017 seeing a record number of entries,” Mr Oldman said.

“We’re proud to produce such an exciting exhibition with each image highlighting the role museums play in educating people about nature.”

Western Australian photographer Bill McClurg was a finalist in the Botanical category for his photo of the Albany Pitcher Plant (Cephalotus follicularis). The insectivorous perennial is found around WA’s South Coast.

“Photography enriches my experience of the natural world by slowing me down and allowing me to notice the smaller details I would otherwise miss,” Bill said.

"Being originally from Ireland, the flora of the South West is new to me and never fails to amaze and fascinate me."

The 2017 Australian Geographic Nature Photographer of the Year exhibition will be on display at the Museum of the Great Southern until 30 April 2018.

The winners of the 10 categories are:

Junior (photographers under 18 years of age)

Elizabeth Howell (NSW) for ‘Coming in for a drink’