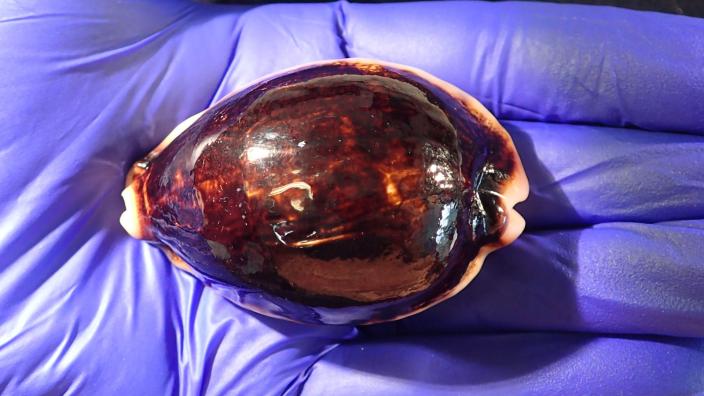 Hailing from the Mollusc phylum, the Leporicypraea geographica rewa form rovae cowrie shell was found off the coast of Exmouth in a 24-metre-deep sea sponge garden.

More commonly known as sea snails, cowries are nocturnal by nature, living in underwater caves and hiding under rocks during the day and feeding on coral and algae at night.

These mighty creatures are strong indicators of coral reef diversity and given the shells fossilise well, prove to be valuable sources of information for scientists studying reef activity.

The discovery of the cowrie shell was made in 1996 by renowned Australian shell diver and collector, Peter Clarkson while on a diving expedition with fellow expert, Andrew Edinger.

The shell remained in Peter’s collection until he tragically died in 2011. A family Trust purchased the specimen in 2013 where it was held in a private collection before the thoughtful donation to the Western Australian Museum was made.

Black cowrie shells are uncommon to Western Australia, making this precious sea gem one of the most valuable in the world and a cherished addition to the Museum’s collection.

Measuring six centimetres in length, the black cowrie shell has a naturally glossy finish and is characterised by its beautiful pattern and interesting variations in colour. Amazingly, the sea snail housed within the shell secretes a special pigment which is responsible for creating the unique patterns we see on the surface.

This stunning treasure is not only beautiful to look at, but it also provides Museum scientists with valuable information about the ecosystem and aquatic life.

Western Australian Museum Technical Officer of Molluscs, Corey Whisson said the contribution by the family Trust was significant and valuable to the State.

“The specimen and its associated collection data will help us define the distribution of this rare species which in turn informs conservation management. The specimen will be housed permanently at Western Australian Museum, making it available for public exhibits, and examination by scientists worldwide.” said Mr Whisson.