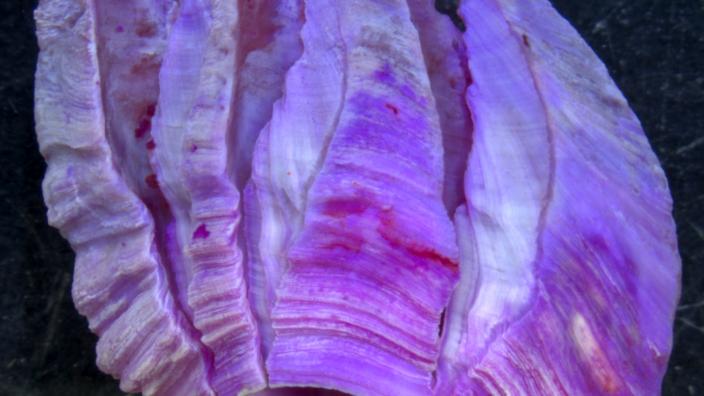 A new species of barnacle, Membranobalanus porphyrophilus, has been named and described after being discovered living on reefs off Rottnest Island.

The striking purple-coloured barnacle was first identified in Western Australia and was later found in the South Australian Museum collection, having been collected in waters around Kangaroo Island.

“This means it is completely embedded within the sponge body with only a small hole allowing the barnacle to extend its feathery limbs, called cirri, into the surrounding water to trap food such as plankton.”

Membranobalanus porphyrophilus is only known to inhabit one species of sponge, the vibrantly purple Spheciospongia purpurea, which is endemic to southern Australia and found from Geraldton to southern New South Wales.

“The fascinating thing about this barnacle is that the shell plates should be white and the body mostly transparent, but they are deeply stained by the pigments of the host,” Mr Hosie said.

“The sponge even retains the colours when dried or preserved in ethanol. The barnacle's species name, porphyrophilus, translates as purple-loving in reference to the coloration of the only known host.”

Western Australia has about 20 known species of sponge-inhabiting barnacles found along its coast, with many yet to be formally named and described.

Scientists from the Western Australian Museum and Curtin University used a range of tools including light microscopy, DNA sequences, scanning electron microscope images and micro-CT scans to build a comprehensive description of the new species.

The barnacle species’ description was recently published in the scientific journal Zookeys and is part of a collaborative project with researchers from the Western Australian Museum and Curtin University, funded in part by the Australian Biological Resources Study and the Gorgon Net Conservation Benefits Fund.

The newly published paper can be viewed at https://zookeys.pensoft.net/article/35421/