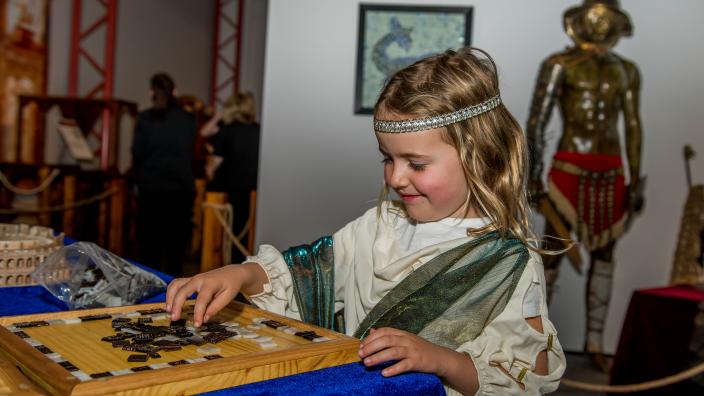 A new exhibition that transports visitors back 2,000 years to one of the most epic, technologically significant times in the history of humankind will open at the Museum of Geraldton Saturday 8 December.

Ancient Rome: The Empire that Shaped the World will provide visitors the opportunity to learn about the military genius of Julius Caesar, admire the disruptive innovations that held the Roman Empire together for centuries, and marvel at the awe-inspiring technology used to construct Rome, which became known as the Eternal City.

“Our artisans have meticulously reconstructed ancient Roman technology to scale from drawings using the same materials and techniques that the Romans used thousands of years ago,” said Thomas Rizzo, exhibition director for tour company The Artisans of Florence.

“Many of the machines are interactive. The entire family will be able to get hands-on with these creations to learn about the fascinating history of ancient Rome, the lives of fearsome gladiators, and the innovations that set the Roman Empire apart from the rest of the world.”

Ancient Rome is touring WA following hugely successful showings in Rome, Melbourne, Adelaide, Hong Kong, China, Taipei, Macao, Korea and regional New Zealand. It is being shown in WA for the first time thanks to sponsorship from SEW Eurodrive.

Museum of Geraldton Manager Leigh O’Brien said Ancient Rome provides a unique way for visitors of all ages and backgrounds to appreciate and experience ancient history.

“This is the first time the exhibition is touring regional WA and we are excited to host it for the Geraldton community. There will be something for everyone to relate to as many Roman inventions such as the book, paved roads, Roman arches, aqueducts, and industrial machinery, continue to be used to this day.

“As a Museum we are committed to bringing the world to the regional areas of Western Australia and we’re thrilled that the Artisans of Florence-International and The Niccolai Group are helping us to achieve this.”

Tickets to Ancient Rome: The Empire that Shaped the World can be purchased from the WA Museum website or at the Museum of Geraldton. The exhibition will be on display at:

For interviews with Leigh O’Brien and for photography and filming requests at the Museum of Geraldton, please contact Hillary Henry (Western Australian Museum Media and Publicity Officer) via (08) 6552 7897 / 0466 304 807 / Hillary.henry@museum.wa.gov.au