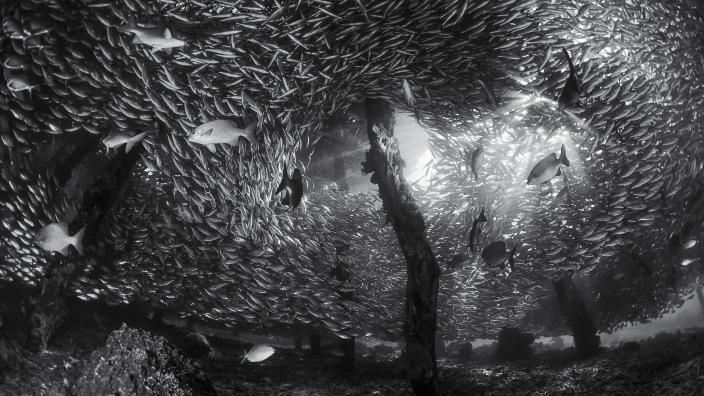 The 2018 Australian Geographic Nature Photographer of the Year collection will go on display at the Museum of the Great Southern on Thursday 1 August.

The stunning exhibition, produced by the South Australian Museum, celebrates the beauty of the natural world through photographs by professional, emerging and amateur photographers who have shown impeccable timing, artistry and technique to capture our extraordinary world. As ever, there is an extremely impressive junior section.

This year’s winning entry is a perfect example of the patience required to capture an incredible moment in nature.

Hide and Seek by Malaysia-based photographer Tracey Jennings captured the exact moment the chase began as a school of fish fled from predators. Ms Jennings took the winning photograph underneath Arborek Jetty in Raja Ampat, Indonesia.

“I’d seen images on social media previously shot under this jetty which inspired me to travel to Raja Ampat. I dived the site over several days; land based and then again a week or so later on a live-aboard trip,” said Ms Jennings.

“I spent about six hours in total at a depth of less than five metres under the single, relatively small jetty, only leaving when I finished my second air tank— way after sunset,” she said.

“This picture actually lay unloved on my hard drive for almost a year. When I did finally go through my images, this one jumped out at me. I love how the light plays through the fish, and how it really describes the essence of the feeling I experienced when below the jetty; where life and death plays around you.”

Ms Jennings is the first individual woman to win the Australian Geographic Nature Photographer of the Year competition. She was awarded $10,000 plus a holiday prize.

Director of the South Australian Museum Brian Oldman said Ms Jennings’ photograph had been judged the winning entry among 2,288 photographs.

“The Australian Geographic Nature Photographer of the Year competition continues to grow, with 2018 seeing a record number of entries,” Mr Oldman said.

“We’re proud to produce such an exciting exhibition with each image highlighting the role museums play in educating people about nature.”

Museum of the Great Southern manager Catherine Salmaggi said the exhibition meticulously captures the beauty of our extraordinary world.

“Visitors will be blown away by images of magnificent landscapes, remarkable plants and flowers, and striking animal behaviours, all captured in Australia, New Zealand, Antarctica and the New Guinea regions.

“What’s even more exciting is that visitors will see a variety of stunning images taken in our spectacular Great Southern region. We hope that by experiencing this exhibition the Albany community will strengthen its understanding of, and be inspired by, the extraordinarily unique and diverse part of the world we live in,” Ms Salmaggi said.

“On arrival at Bluff Knoll there was a clear sky, so my expectations were low. Within minutes the peaks created their own clouds, as they are known to do, and just in time for sunrise, created this stunning scene,” Dylan said.

The 2018 Australian Geographic Nature Photographer of the Year exhibition will be on display at the Museum of the Great Southern from 1 August – 1 September 2019.