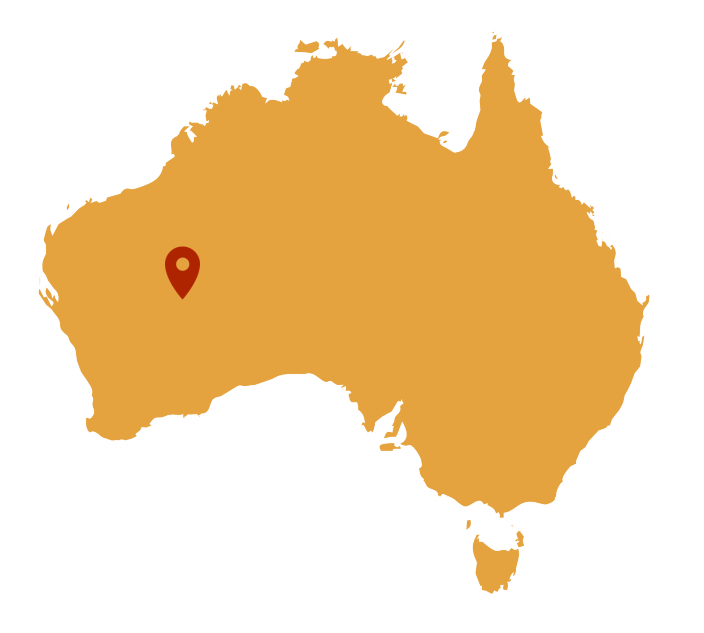 Palatji / Weld Springs / Forrest's 'Fort' / Well 9 is a special place. For generations the local Martu people have regarded Palatji as an important source of water, food and other resources and nearby is a significant tjukurrpa (dreaming) site. However, it's also a contested site. John Forrest and his exploration party travelling to the area in 1874, naming it Weld Springs after the colony’s governor, and a conflict ensued with the local Martu people. The spring later became an important stop on the Canning Stock Route, and a watering hole on Glen-Ayle Station.

Forrest and the Martu People

Martu people call this area Palatji. For generations it has been an important source of water (kapi), food (mirrka) and other resources. One important plant is Minkul, a type of bush tobacco. A smooth quartz outcrop located behind the spring is the tjukurrpa (dreaming) site associated with this plant.

It is a place of contested understandings.

John Forrest and his exploration party travelled through this country following the course of the Murchison River and looking for new pastoral country. In June 1874 they arrived at Palatji naming it Weld Springs after the colony’s governor.

Forrest spent two weeks camped at the springs. On the seventh day of their camp, Forrest records in his diary that a group of 40 to 60 Martu men, “all plumed up and armed with spears and shields”, appeared over the hill overlooking the springs. According to Forrest, the men rushed, “yelling and shouting”, towards the explorers brandishing their spears. Forrest and his men fired at the group forcing them back up the hill where they regrouped. A second approach followed soon after and this time one man was hit and wounded. The next day Forrest records finding blood near the camp and speculated that two men were hit by rifle shot, with at least one suffering a severe wound.

The Martu tell the story much differently:

“It was night time, ….. old people sitting down around fire singing. 20 yards away old people saw him, a white one. One man got up and tried to spear him, they shot him, then shot another. Next day old people tried to come to get water at the spring. They had built a fort, biggest mob came in – they killed ‘em, dragged ‘em like a dog..” (Senior Martu man, 2010)

These are the remnants of the hut that John Forrest’s exploration party built in 1874. The hut was constructed following an armed confrontation between a large group of Martu men and Forrest’s men. Fearing another attack, Forrest and his party spent almost two days building a protective structure. The stone hut measured “ten by nine feet (3 x 2.7m), and seven feet high (2.1m), thatched with boughs”. Despite the precaution Forrest reported no further confrontations between the two groups.

It has been suggested that the presence of a large group of Martu men at the springs indicated that ceremonial business was in progress and the Martu were attempting to move the foreigners away. Forrest’s journal contains nothing to suggest that he was aware that his party’s presence at the springs might conflict with Aboriginal uses of the area. Forrest’s fort stands as a reminder to visitors of the need for reflection on cultural understandings and relationships between black and white Australia.

In 1874 the explorer John Forrest described Weld Springs as one of the best springs in the colony, with an unlimited supply of water. Later reports noted that the presence of water was not as reliable as Forrest had suggested and that the soak was often dry. In 1906, A.W. Canning visited Weld Springs and found the water “not too good”. However, he was confident that a well would provide access to good water and he returned two years later to sink Well 9 on what became known as the Canning Stock Route.

Use of the stock route

The newly constructed stock route was used for the first time in 1910. In 1911 desert people killed a droving party at Well 37, some 550 km north. A punitive police expedition seeking the culprits recorded killing 10 Aboriginal people. For the next twenty years the stock route was rarely used.

In 1928 a Royal Commission was established to examine a decline in the Western Australian beef industry. The inquiry covered issues such as the cost of production, the quality of livestock and the barriers to marketing and distribution of beef in Australia and overseas. Amongst its findings was a recommendation to re-commission the Stock Route, which had had no maintenance since the original wells were sunk by Canning. It was felt that the re-commissioned stock route would provide access to new pastures along the route and improve the cattle industry in the East Kimberley.

In 1929 William Snell was engaged to re-condition the wells, many of which had been damaged by Aboriginal people in frustration because many of Canning’s wells were impossible to access safely. Snell rebuilt the wells and fitted some with ladders to assist access. The refurbished stock route attracted more regular use though it supported 200 less cattle than originally proposed. The last run of cattle took place in 1959.

Three generations of the Ward family have worked this country. Henry Ward surveyed the area in 1947 then applied for the lease from the State Government’s Lands Department. The lease was granted in 1948. In 1949 he moved 300 head of cattle onto the property, which was then known as Parker Range. The station was renamed “Glen-Ayle” by Henry in honour of his wife Eileen (also known as Ayle) and because the country around the original 1940s homestead reminded Eileen of a Scottish Glen.