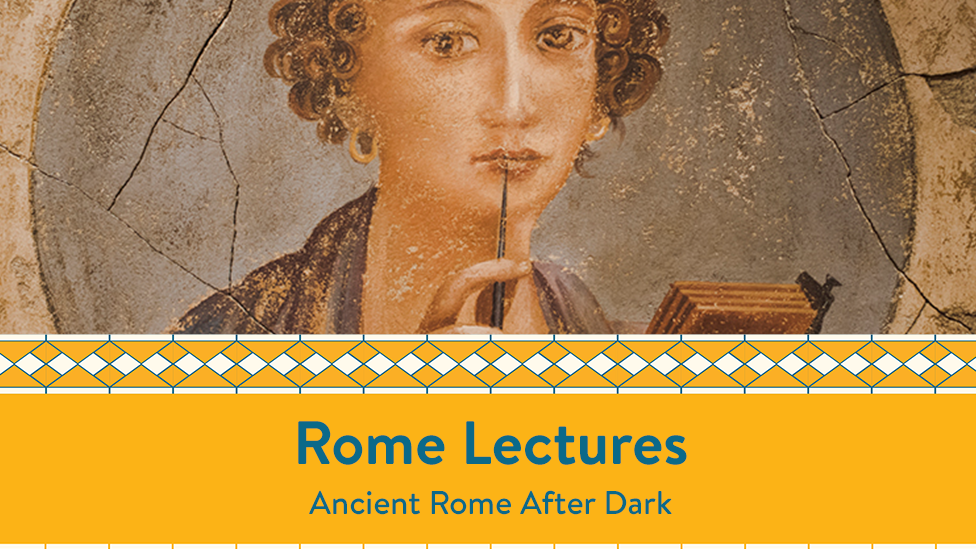 Listen and learn as our experts guide you through the amazing and extraordinary world of the Ancient Romans.

Dates: Sunday 8, 15, 22 and 29 March
Cost: Lectures are free and will run for one hour or less. Entry fees apply if you wish to explore the Museum or Ancient Rome
Bookings: Essential by calling 1300 134 081 or by using the below links.

"Building the Baths of Caracalla"

The ruins of the Baths of Caracalla in modern Rome are one of the most striking surviving ruins of the ancient world.

Despite their scale, only a fragment survives, a testimony to the enormous size of the original structure. Largely built from brick-faced concrete, they represent an enormous logistical effort in finding and exploiting raw materials, their transport, manufacture and then construction and ornamentation. An Australian scholar based in Oxford has undertaken the task of calculating likely needs and the overall logistical effort of this grand building project.

Join David Kennedy as he offers a short survey of the Baths and the findings which may be applied to other major building projects in Rome. What emerges is further evidence of the Roman world which shows - as Sir Mortimer Wheeler once described - ‘the grandeur of their thinking’.

David Kennedy’s principal research focuses on the Roman Near East where he has conducted fieldwork since 1976 ranging from survey in the Southern Hauran (Jordan) and the hinterland of Jarash to excavation at Zeugma (Turkey). Of particular interest in his research are the Roman army and military installations, landscape archaeology and aerial archaeology. David is founder of the Aerial Photographic Archive for Archaeology in the Middle East (APAAME) (1978) and co-director of the Aerial Archaeology in Jordan (AAJ) project (since 1997). He is currently engaged in a 2-year programme of Aerial Archaeology in Saudi Arabia.

Recent publications include Gerasa and the Decapolis (2007), Settlement and Soldiers in the Roman Near East (2013) and an eBook, Kites in ‘Arabia’ (2014). David is currently working on books on the Hinterland of Roman Philadelphia, the Umayyad Palace at Muwaqqar and Travel and Travellers East of Jordan in the 19th Century.

"A Roman Wine Guide - From Ancient Rome to Wine Today"

Rome has a long, deep rooted relationship with wine.

From Ancient Rome to the present day, wine has always been an inseparable part of its culture. Join Michael Tamburri, the 'Master of Wine' to discover more about wine making and wine culture in Ancient Rome and Rome today.

Michael Tamburri, the 'Master of Wine'

Michael Tamburri is the owner of La Vigna Wine Merchants and has over 40 years’ experience in the liquor industry.

Michael has been a long-term advocate for the industry, and his store in Menora has an extensive range of liquor products with a particular focus on Italian wines. Given Michael’s Italian heritage he has a passion for Italian wines and regularly travels to Italy where he meets with various wine producers across the country.

"Rebel girls of Rome: The status of women in society and the prominent troublemakers who challenged the status quo"

Women occupied a complex position in ancient Roman society, as they were considered functionally and legally to be under the patriarchal guidance and ownership of the male head of the Roman family that they belonged to.

Join Danielle McCabe as she discusses how many Roman women found ways to achieve legal and social personhood within Roman society, and some great tales of prominent ‘rebel girls’ who made history through their exploits. This talk will include a summary of the rights and roles of women of the elite, free roman citizens and those in slavery and will also include an overview of some of Rome’s notorious women. These figures include Hypatia of Alexandria who was the first woman executed for witchcraft; Porcia Cato’s daughter, Hortensia who led a political rebellion against unfair taxation; Fulvia who nailed Cicero’s tongue to the senate door and the infamous Julia whose promiscuity scandalised Rome.

Danielle McCabe spent a number of years as a tour guide in Rome, specialising in presentations featuring the Palatine Hill, the Colosseum and the Roman Forum. She studied Ancient History at Notre Dame and University of Western Australia with a focus on the Ancient Roman world. She now teaches Ancient History at Mount Lawley Senior High School.

"The Battle of Actium: Augustus versus Marc Antony and Cleopatra in 31 BC"

Join Michael Page for a lively discussion of the defining conflict of the ancient Roman world during the period of civil war that followed Julius Caesar's death. The Battle of Actium would see Octavian (Augustus) win decisively against the forces of Marc Antony and the Queen of Egypt, Cleopatra. This naval battle effectively ended the Roman Republic and brought forth the rule of Octavian as Augustus Caesar, a legacy that would shape Rome’s imperial future.

Michael will introduce the Roman warships that defined this naval battle, along with the naval tactics and weapons that featured in the Ionian Sea on that fateful day. This discussion will identify the the strengths and weaknesses of the combatants, the three key phases of the battle, and analyse why the battle was won by Augustus and lost by Marc Antony.

Colonel Michael Page was born in Warwick, England and emigrated with his family to Australia in 1967. Colonel Page is a graduate of the Australian Army Command and Staff College, in Queenscliff, later receiving his Reserve Forces Decoration in 2000, a Training Commander’s Commendation in 2004 and the Australian Defence Medal in 2006. He was promoted Colonel on the 1st January 2007, and posted as the Director Army Personnel Agency Perth, and subsequently appointed as an Honorary ADC to the Governor General of Australia on the 1st January 2008. His last posting in 2013 was as the Senior Military Liaison Officer at the Directorate of Indigenous Affairs, Canberra.

Michael completed a Bachelor of Arts (History) the University of Western Australia in 2011, and after retiring from military service achieved his Honours in History in 2014, during which time he delivered multiple lectures on ancient military battles to the Classical History faculty. He was awarded the Rae Metcalf African History and the UWA Convocation History prizes in 2011 and a Jean Rogerson Honours Scholarship in 2013. Michael is married to Lesley, a teacher, and they have two adult children who are happily pursuing their own lives. His leisure interests include military history, war-gaming, travel and supporting the Wallabies. He is currently writing the biography of the RSM, SAS Regiment, Laurie Fraser.