We’re always working on new and exciting stuff here in the Anthropology & Archaeology Department; it’s one of the great things about the Western Australian Museum. Every item in the collection represents a chance to discover new or otherwise interesting things about the world around us. Every so often however, a collection of items is donated that can be considered particularly different, rare, beautiful or interesting. In this particular case, the Anthropology & Archaeology Department has recently been working through a Papua New Guinea donation by Louise Rath. The collection features nine objects from the Middle, East and West Sepik regions, originally collected by John Simpson.

Among other things, the collection includes a number of Papua New Guinea shields that exemplify the artistic warfare culture of the region. Shields represented practical and aesthetic objects for protecting one’s self in tribal warfare, events that were often situated in conflicts of identity, ritual, and social factors. Most battles in Melanesia were conducted with the use of projectiles (spears, spear throwers, throwing clubs or sticks, stones, and more recently, the bow and arrow), making the shield perfect as… well… a shield! Such objects would often be adorned with powerful motifs, colour, and symbolism to protect the carrier from magic or imbue fear in the opponent.

Standing Shields are thought to have been used in protecting villages or as stationary cover after a battle has commenced. Both of the Standing Shields are approximately 200 cm high and 40 cm wide (they are quite large!), making them ideal protective barriers. On the other hand, their size, weight and general awkwardness make these shields hard to manoeuver. Often, one warrior would be tasked with holding the shield, while another would fire arrows from behind. The first Standing Shield, featuring a colourful clan design, was collected from Kupkein Village along the upper Sepik River.

The second shield, featuring more natural carved design, was collected from Iwam along the lower May River (East Sepik). The motifs depicted on these shields usually refer to plant and animal totems particular to each clan. In the case of the Iwam shield, its concentric circles are thought to represent human heads

The smaller Cover or Parrying Shield would have been used to absorb blows or missiles, and has a recessed vertical grip that is typical of the New Britain Region. The shield is in exceptionally good condition for an older specimen and features an Arawe design from the Kandrian- Arawe area, West New Britain.  These shields are known as ilo in the Kandrian kaulong dialect, or as hiliyo in neighbouring regions.

The Pig skin shield is especially interesting, having evidence of puncture and repair. Purportedly held by younger initiate men, this type of shield is from the Kwoma area of the Upper Sepik. Since the shield has no strap to suspend it on the shoulder, it is likely that it was carried with an arm passed through the cross framework. I’m not convinced that such a shield would offer much protection from a fast moving projectile however!

The collection also contains a woven dance mask, or tumbuan, another great example of the cultural diversity and colour of this collection. A previous blog we posted: “The Eharo Mask” (http://www.museum.wa.gov.au/explore/blogs/museumcollections/eharo-mask), introduced notions of mask cultures in Papua New Guinea that are as vibrant as they are diverse. This tumbuan is no exception. Many tumbuan masks represent actual or spiritual ancestors and are produced thoughout the Sepik region; WAM’s example originates from the Middle Sepik. The tumbuan here features the distinctive two faced, hooked nose, striped design of dance masks produced in Kanganaman village. The lower face features eye holes for the wearer to see during the dance ceremony while both faces are lined with cassowary (or  muruk) feathers.

As you can see from our images, the mask is particularly large, standing 157 cm high and 70 cm wide (almost as tall as Annie and much taller than Ross!). Preparing it for photographing was a considerable effort, especially considering the delicate raffia base that sheds at the slightest touch. Ross ended up building a makeshift stand that supported the mid-section while keeping the raffia off the ground. It was a tough effort, but definitely worth it. 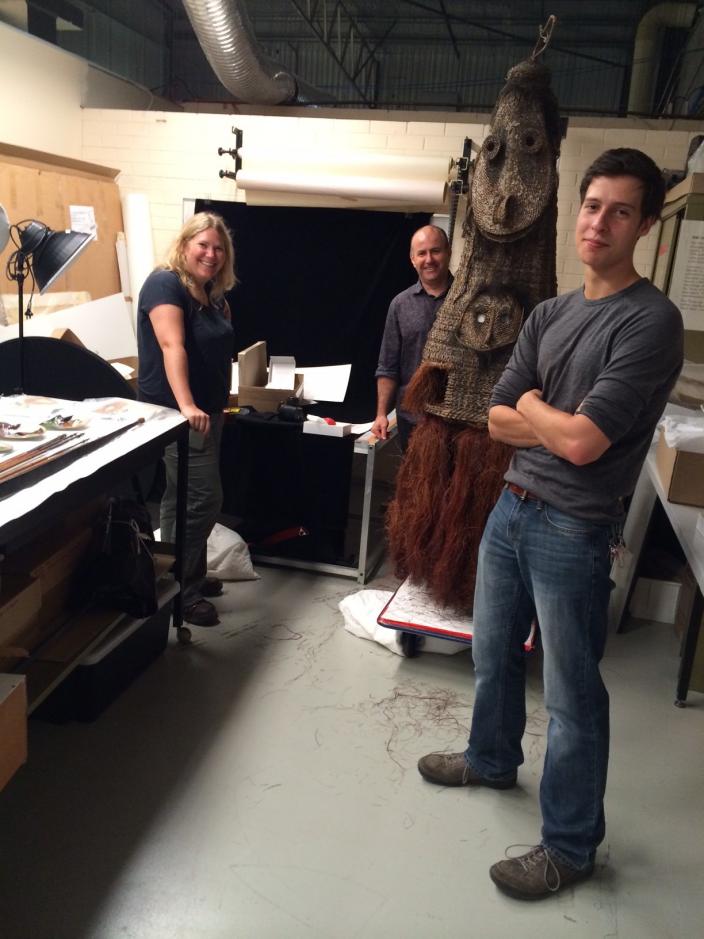 Written and Photographed by: 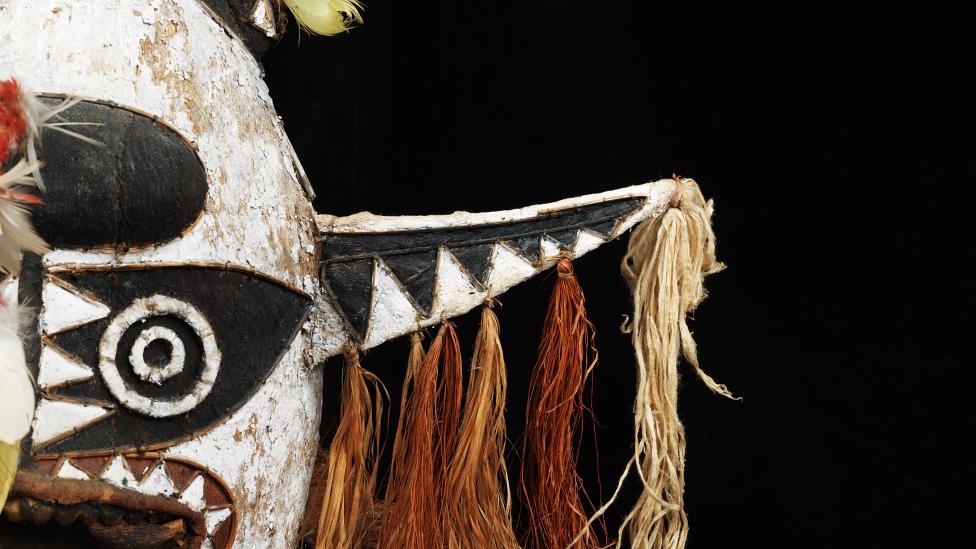 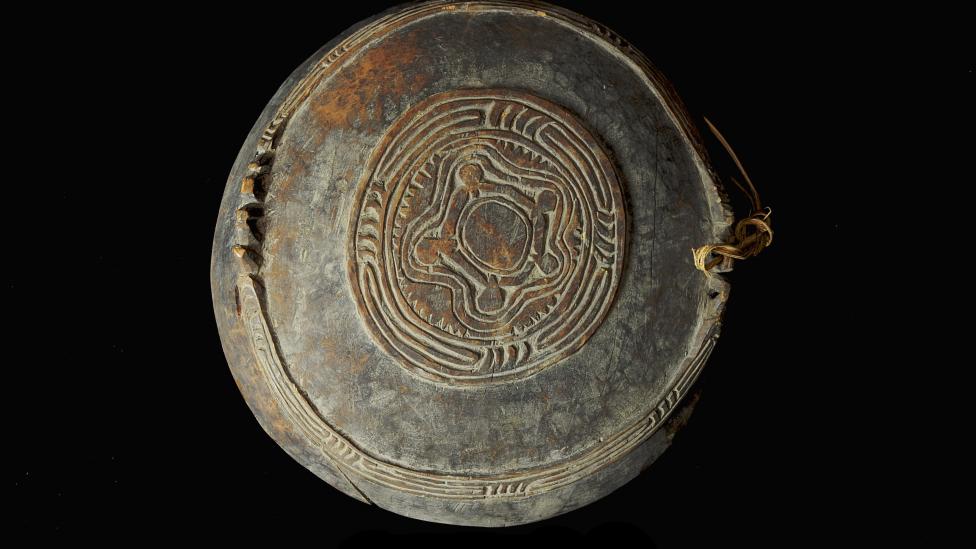