In March 2014 the Museum was lucky enough to welcome the CSIRO robotics team to talk about 3D mapping of physical spaces and digital preservation of significant locations.

We hope for this to be the start of a longer-term partnership, and as such, I plan to write some blogs about any advances that we may experience. But to start with, and very excitingly, the CSIRO team brought along their wonderful creation: Zebedee.

Zebedee is a handheld laser-scanning device that sends out and collects thousands of measurements every second to create a 3D spatial map as you walk through a space. Thus 3D maps of various spaces can be created in the time it takes to walk the device through that area (such as a gallery, cave, or even an outdoor scene). Traditional 3D maps can take days, weeks or months; Zebedee takes minutes.

So before our meeting, Dr Jonathan Roberts took the Zebedee system through the Western Australian Museum – Perth and created a comprehensive 3D matrix of the museum, and the whole process took only about 30 minutes!

From the matrix, they generated some stunning maps and models of the museum, a sample of which can be seen below. To see more of their results, check out our online photo gallery. If you want to know more about Zebedee, check out the CSIRO website, or watch it in action on YouTube.

Update: The data collected by CSIRO, used to generate these pictures are now available.

The data included in this collection includes two scans of the WA Museum acquired by CSIRO with the Zebedee 3D mapping system in March 2014. The data collection includes two datasets, one of the library hall and one of the remainder of the public areas of the museum. The two datasets overlap. The datasets are aligned and registered into a common coordinate frame (though this coordinate frame is currently not georeferenced into a global frame). Therefore, it is possible to view both files simultaneously in a viewer. The data are provided as 3D point clouds in .laz files, which is a standard 3D data format and can be opened in a number of different viewers.

3D data of the Western Australian Museum is courtesy of CSIRO and was acquired using the Zebedee 3D Mapping System in March 2014. 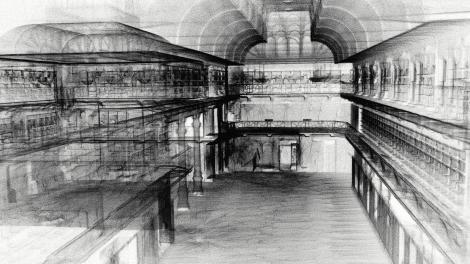