Crustaceans such as crabs, lobsters and prawns are a major component of peoples’ diets around the world with eleven million tonnes caught or cultured annually. Despite a considerable diversity of crustacean species in Australia, only a handful of species are harvested as part of commercial or recreational fisheries. In Western Australia there are only about a half-dozen crab species that are commonly seen in seafood restaurants or fish markets, with the blue swimmer and mud crabs being the most common.

Not all crabs are safe to eat, however, and a few can carry lethal doses of toxins. Most of the toxic crabs belong to the family Xanthidae which is the most diverse family of crabs in Australia and notable for their black tipped claws. So far, only a small number of species of this family are known to be toxic, but it is a good idea to avoid eating them regardless. These crabs are not truly poisonous and the crabs do not produce the toxins themselves. Some species are not always toxic, so it is likely that the toxins are obtained through the crab’s diet or possibly by symbiotic bacteria. Crabs have no mechanism for delivering these toxins, such as through a bite or poisonous spines, so poisoning only occurs when people consume the crabs.

These xanthid crabs can accumulate two of the most lethal natural substances known - saxitoxin and tetrodotoxin - in their muscles and egg masses. Both saxitoxin and tretrodotoxin are so incredibly toxic, that as little as half of a milligram is capable of killing an average sized adult. The toxins are also heat stable and will persist in the tissues despite being cooked. Saxitoxin is the primary toxin involved in paralytic shellfish poisoning, which is often caused by people eating mussels or oysters that have consumed toxic algae. Intriguingly, saxitoxin is listed as a grade one chemical weapon under the UN Chemical Weapons Convention and was reputedly used by the CIA in suicide pills. Tetrodotoxin on the other hand is famously found in the Japanese puffer fish, a delicacy known as “fugu” which only the most skilled chefs are licensed to prepare. Both chemicals are neurotoxins, affecting the nervous system, resulting in paralysis by shutting down the nerve cells’ ability to transmit information.

There are a number of known Australian species that may be toxic if eaten, and while some do reach good sizes most are relatively small. While care should be taken for the preparation of all seafood, if you’re not sure what the species is, then the best possible advice is to not eat it.

Three of the common toxic species are pictured below. All three are found in the intertidal and subtidal reef flats across northern Australia. These species have distinctive colour patterns that make them quite conspicuous on the reef and relatively simple to identify. The aptly named Toxic Reef Crab (also referred to as the Devil Crab), Zosimus aeneus, can be so toxic as to kill within a few hours of consumption and has been reported to be used by Pacific Islanders as a means for suicide. 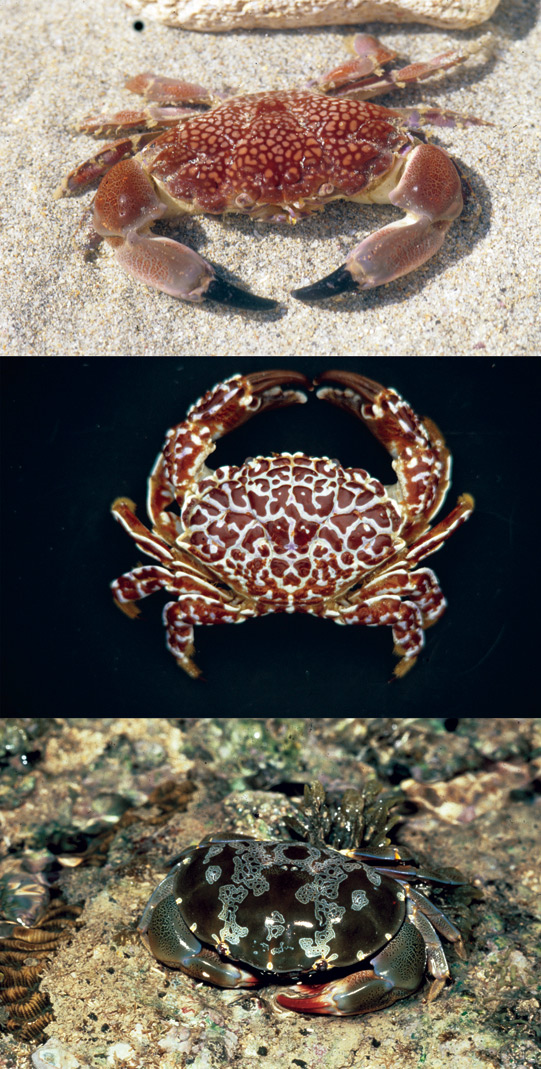