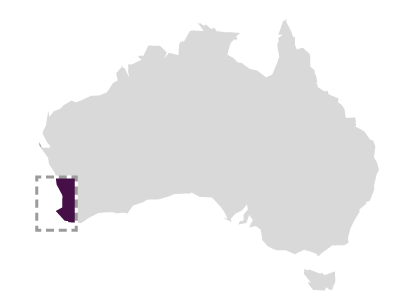 Gaël was built by Atelier & Chant de la Loire at St Nazaire and had one deck, two tiers of beams, a poop 20.4 m long and a forecastle 15.6 m in length. The vessel was owned by the firm of Celtique Maritime, and the master was Desire Meteye with a crew of 24. Captain Meteye was 46 years of age and had spent 30 years at sea.
The Gaël had suffered a previous incident in early June 1905, having taken on a cargo of iron ore at Port Pirie in South Australia for Antwerp. Shortly after commencing the voyage the vessel struck heavy weather described as a ‘fearful storm’ (Western Australian, 28 August 1909: 12d). The deck was swept by waves and the vessel rolled substantially. It gave one especially great roll and did not come back upright, so the crew realised that the cargo had shifted. The vessel was put about and managed to make towards Adelaide, which it reached without further incident. Investigation showed not only a major shift in the cargo, but also some broken frames and other structural damage. This required placing the Gaël in dry-dock for repair. As there was no such dock at Adelaide, the tug Wato was employed in towing the Gaël to Melbourne for repairs.
On 29 March 1902 the French steel barque Ville d’Orleans developed an uncontrollable leak due to extremely rough weather and sank 440 miles south west of Tasmania. The crew were rescued by the Gaël (Nicholson, 1993: 551).
The Gaël was carrying a full cargo of cement, when it left London on 23 May 1909 and then called at Cherbourg on 26 May for the bounty paid to French sailing vessels at that time. Good weather prevailed until the vessel approached the Australian coast.
THE LOSS
The Gaël met with strong winds and heavy seas in mid-August, and on 17 August it was found to be taking on water. There was 1.2 m of water in the hold so the steam pumps were put into action. This proved unsuccessful and the water continued to gain. The crew resorted to buckets rigged to tackles to supplement the pumps, but still the water continued to rise. Captain Meteye jettisoned much of the cargo, however five days later, on Sunday 22 August, he decided to abandon ship. He estimated his position then to be at latitude 36° 44’ S and longitude 111° 47’ E, approximately 170 nautical miles south-west of Cape Leeuwin.
The three ship’s boats were lowered, but one was smashed against the side of the barque. One of the two boats saved was a 2-masted lug-rigged (also with jib) lifeboat 23.5 ft (7.16 m) long with a beam of 6.25 ft (1.91 m) and a depth of 2.8 ft (0.85 m) into which the first mate, Maurice Gerard, and 12 crewmen took stores and water. This vessel had air tanks running down each side of the hull and was therefore unsinkable. It was equipped with seven 18 ft (5.5 m) ash oars. The captain, the second mate, Joseph Veandes, and ten crewmen took to the other boat, of about the same length but more lightly built and without air tanks, having instead cork fenders around the gunwale. They also took plenty of provisions and water. Each boat had a sextant, chronometer and some charts, together with oil for use in rough or broken water.
The boats stayed by the sinking Gaël on Sunday and Monday (23 August), but between 7.00 and 8.00 p.m. on the Monday evening, after going on board the Gaël and finding 3.4 m of water in the hold, the mate decided to sail for the nearest port. The captain stayed until the barque sank at about 11.30 p.m. when he too set sail, intending to head for Albany.
Three days later the mate’s boat was seen by the staff at the Cape Naturaliste Lighthouse and the tug Vigilant (Captain Coalstad) was sent from Bunbury to meet them. The lifeboat had tried to enter Bunkers Bay but was driven back by the wind. It was picked up at 4.00 p.m. some 30 km from the cape and less than 15 km from Busselton, to which the crew had been heading. They were then taken on to Bunbury.
When word reached Fremantle, the Chief Harbour Master immediately ordered the tug Dunskey to depart Albany and search for the captain’s boat. At the same time the Penguin was despatched from Fremantle to join the search, with the Vigilant to stand by at Bunbury.
Meanwhile Captain Meteye had reached the coast at Flinders Bay, and at about 3.00 p.m. on Wednesday 25 August he decided to attempt to go ashore. In landing, the boat was capsized in the surf and everything including the ship’s papers was lost. The following day, after camping that night on the beach, the castaways found a case of preserved milk and a barrel of biscuits. This sustained them while they endeavoured to find help. Following a bush track they met W. Pickersgill, a possum trapper, who lead them eight kilometres to the timber mill at Jarrahdene. Here the manager telephoned his superior at Millars Karri and Jarrah Company at Karridale, who sent a train to collect the exhausted survivors.
INQUIRY
There does not appear to have been an inquiry in Western Australia on this foreign owned vessel. Captain Meteye considered that the Gaël had sprung some plates in the heavy weather that they had encountered, and this had caused the uncontrollable leak.
INITIAL SALVAGE
The mate’s lifeboat, its gear, and the stores remaining in it were seized by the Customs authorities at Bunbury.

Where Lost 165 miles off Cape Leeuwin