Located adjacent to the Western Australian Museum – Maritime at Victoria Quay, Fremantle, the 3 Stages of the Welcome Walls display more than 21,000 inscriptions, paying tribute to some 45,000 immigrants to Western Australia.

The Welcome Walls began as a one-off project in 2004 as part of the commemoration of the 175th anniversary of the founding of the Swan River Colony. It was originally planned to display about 2,000 inscriptions.

When the project was first announced, the public response was immense and the Western Australian Museum was overwhelmed with phone calls, letters and emails requesting a place on the Walls. The Government of the day quickly came to the decision that the number of inscriptions should increase to around 8,000.

When the Welcome Walls were launched at the end of 2004, public interest in the Walls surged once again. The demand from those who had missed out on inscriptions for the first set of walls was so strong that a second stage was built and launched in 2006, adding a further 8,500 to the original Walls (which by this time was referred to as ‘Stage One.’)

Following the launch of Stage Two, public demand remained so high that a further extension was announced. The third and final stage of the Welcome Walls was unveiled in December 2010 and its design integrates key elements of the first two stages, completing the project as a seamless feature of both the Maritime Museum and the Victoria Quay waterfront. 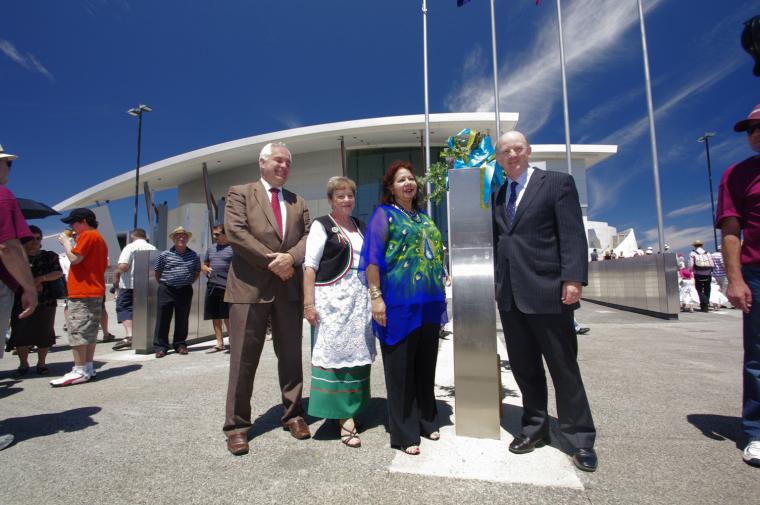 The Welcome Walls began in Fremantle as a one-off project in 2004 as part of the commemoration of the 175th anniversary of the founding of the Swan River Colony. It was originally planned to display about 2,000 inscriptions.

The Albany Welcome Walls concept was announced by former Premier, the Hon Alan Carpenter, in June 2006.

The Welcome Walls are located onsite at the Western Australian Museum – Albany, adjacent to the historic Residency building and the Amity Pond. They are inscribed with about 500 names as well as the passenger ship and year of arrival.

The design created by local Albany firm Howard and Heaver Architects, incorporates a boardwalk stretching from the Museum’s Residency Building over the water of the Amity Precinct and references the original water line and location of Lockyer’s first landing place at Point Frederick. The Welcome Walls overlook Princess Royal Harbour, the Amity Precinct and the Albany Port and link with the Kinjarling Trail.

The design is symbolic of the journey many migrants made when they disembarked in Albany with the boardwalk including timbers from the original Town Jetty, the same jetty the migrants would have walked along as they made their way to Australian soil.

Coloured banding on the top of each wall provides a link to the funnel colours of the passenger steamship lines that were prevalent during the peak period of immigration through the Albany port.