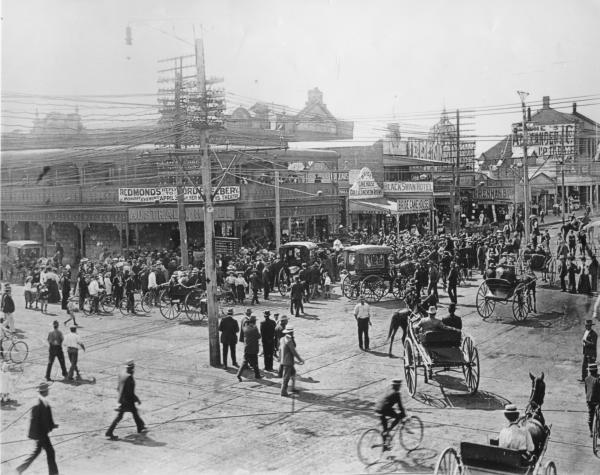 Hannan Street H.R Redmonds arrival at Australia Hotel 1905. Mr William was MP born 1861 Barrister by profession. He was the son of late WA Redmond MP of Ballytrent County Werford who was MP for Werford from 1872 - 1880. Mr William Redford was returned to Parliament as member for Werford in 1883. Subsequently he represented Cpounty of Fermanagh and while in Kalgoorle was member for Clare. His wife was an Australian and his elder brother was leader of the Bush Nationalist Party. Mr Redmond and his brother were staunch adherents of Mr Parnell after the split in the Bush Party that preceded the latters deth. We believe he was speaking on Irish Home Rule. On returning home Mr Redmond wrote a book in 1898 and published it "A shooting trip in the Australian Bush". 1905