In 2002, Father Ken Boland of St. Francis’ Church, an avid cave diver with a keen interest in biology, spent several weeks screening the vast, arid plateau of the Nullarbor Plain with a team of cavers: Peter Ackroyd, Paul Devine, Eve Taylor, Chris and Ray Gibbons. Using an ultra-light aircraft he flew a grid pattern of a large section of the Nullarbor surveying for landscape features resembling cave openings. From this extensive survey, the team discovered three definite cave openings out of 1500 possibles.

When Ken Boland and Ray Gibbons entered one of the openings, they discovered something amazing and totally unexpected. Ray, with a keen interest in palaeontology, identified a complete Thylacoleo carnifex, or Marsupial Lion, skeleton laying on the cave base. The skeleton had no dust on it and looked to be almost fresh - far younger than could be rationally explained since the Thylacoleo had been extinct for 50,000 years. On returning to base camp, the team were astonished to learn that a fellow expedition member who had been exploring one of the other cave openings, reported remains of what appeared to be a Thylacine (Tasmanian Tiger) and a possible second Thylacoleo. What a day!

Realising the significance of the findings, they contacted the palaeontology department of Flinders University. As the discovery was located on the Western Australian side of the Nullarbor, the WA Museum was notified and both organisations arranged to explore the caves that could totally change our understanding of the extinction of megafauna in Australia.

Following the discovery the WA Museum and Flinders University lead an expedition to the site guided by the original team who discovered the fossils. This same team stayed on a voluntary basis to assist with the recovery of the important fossil finds. 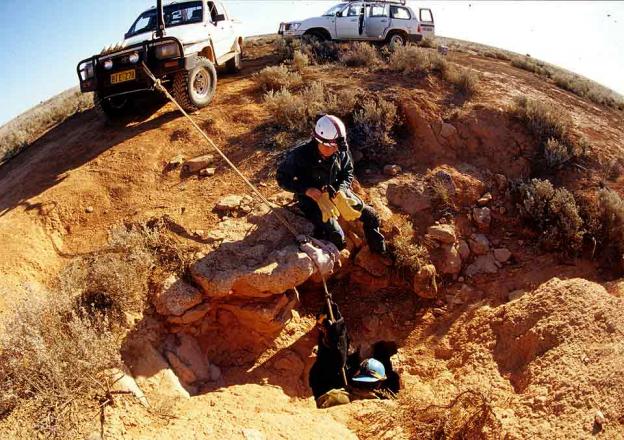 The three caves discovered during the expedition were named:

The three caves have been open for the last 750,000 years, and during this period the caves have occasionally captured a stray animal that has walked too close to the edge, or has been caught in the winds when the caves breathed in. It all has to do with air pressure. Below the surface the caves hold a lot of air which can only escape through a small opening in the earth. When a High Pressure system moves in from the west, over the Nullarbor, the air rushes into the cave at a speed of up to 70km/hr. When a low pressure system moves in, the cave blows out. The bigger the pressure gradient, the stronger the cave "breathes". Once inside the cave, there was no return for the unfortunate animals who died in its depths to become fossils.

When Ken Boland and his team entered the caves they understood it was the first time any human had ever entered them. 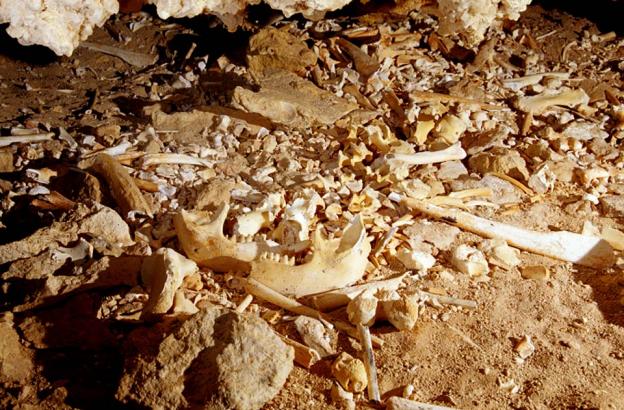 Careful excavation of the intact Nullarbor Thylacoleo was undertaken in the hopes of gathering ancient DNA, but the skeleton was too old and very fragile. When the samples were finally dated they revealed the skeleton to be far older than their appearance. After much investigation, the researchers concluded the skeleton had not mineralised remaining preserved in its original state since its death between 780,000 to 500,000 years ago. This amazing preservation is due to the low humidity, cool temperature and stable environment within these remarkable caves.

The WA Museum and Flinders University continued to visit the caves to collect more specimens and perform further investigations. Their amazing heritage became clearer with each investigation.

By studying the fossils in these caves we can learn about our past, how the climate changes over time to support different habitats and reveal insights into how our past can help us understand the present, and what lessons this has for our future.

The expedition to the Nullarbor caves is a collaborative effort between the Western Australian Museum and the Flinders University.