Marine Biodiversity survey of the Kimberley 2009–2014

Available are 3 of 12 occasional papers concerning the Woodside Kimberley Collection Project (Surveys) 2009–2014 with the balance of papers to be published in due course.

This field guide is intended to facilitate field identification of Kimberley specimens collected from depths of 12-100 metres using visual and microscopic characters. The guide will also aid future field monitoring and additions to biodiversity collections. Locations of fieldtrips are provided below.

Specimens were identified to species or OTU (Operational Taxonomic Unit).

This guide has been compiled by Dr Monika Bryce.

Abstract: In 2012 and 2013 the Western Australian Museum (WAM) undertook a comprehensive biodiversity survey in the Sahul Shelf Bioregion, which encompassed the intertidal and shallow subtidal reef communities of the outer shelf atolls of Ashmore and Hibernia Reefs, and several submerged midshelf shoals. While the outer shelf has seen some octocoral sampling effort in the past, there was no information from the midshelf region [...].

Abstract: New surveys of the Kimberley Nearshore Bioregion are beginning to fill knowledge gaps about the region’s marine biodiversity and the national and international conservation significance of this little-known tropical reef system. Here we report the recent finding of two unique coral habitats documented at Adele Island and Long Reef during theWoodside 2009/2010 Collection Project surveys. Firstly, we report the finding of a subtidal zone of mixed corallith and rhodolith habitat which appears on current records, to be unprecedented in Australia. Secondly, we report the discovery of an atypical Organ Pipe Coral habitat zone and provide empirical evidence that this commercially valuable species reaches an unparalleled level of benthic cover. We provide additional details about the wider hard and soft coral assemblages associated with these unique habitats; discuss the potential biological causes In 2008 the Western Australian Museum, with other Australian museums and the WA Herbarium, initiated an extensive data collation project to extract historical Kimberley, shallow-water marine biodiversity data from their collections. The Woodside Collection Project (Kimberley) spanned a Project Area in excess of 475,000 km2 that extended from the coast to the shelf edge. This project resulted in a series of publications that in combination documented over 6000 species, and highlighted major gaps in our knowledge. From 2009 to 2014 a multi-taxa marine biodiversity survey program was commenced with sampling throughout the Project Area. 181 stations were surveyed covering various faunal taxa, marine plants and water quality. The initial data collation project and the recent surveys provided research opportunities and field experience for many career level students. The WA Museum is now poised to expand its survey program from the shallow waters of the Kimberley to the deep sea. This new innovative program, albeit at the proposal phase, will opportunistically capture video of fauna from Woodside Energy exploration drilling campaigns, down to a depth in excess of 2000 m utilising Remotely Operated Vehicles. The work will further provide research opportunities for students, and early career researchers, well into the future. Abstract: The intention of this identification guide is to provide coral identification material to support research, monitoring and biodiversity conservation in Western Australia.

This guide provides an introduction to the key characteristics required to identify shallow-water, reef building corals to the genus level based on the revised scleractinian coral classification system as of May 2018. This manual should be used in conjunction with other taxonomic sources (see reference list) and with reference to the World Register of Marine Species (www.marinespecies.org) and the World List of Scleractinia (http://www.marinespecies.org/scleractinia).

This work is licensed under a Creative Commons Attribution-NonCommercial 4.0 International License. Marine Biodiversity of the Kimberley 1880s–2009 Abstract: To better understand the underlying causes of rarity and extinction risk in Acropora (staghorn coral), we contrast the minimum divergence ages and nucleotide diversity of an array of species with different range sizes and categories of threatened status. Time-calibrated Bayesian analyses based upon concatenated nuclear and mitochondrial sequence data implied contemporary range size and vulnerability are liked to species age. However, contrary to the popular belief based upon morphological features that geographically restricted Acropora species evolved in the Plio-Pleistocene, the molecular phylogeny depicts some species restricted to the Indo-Australian Archipelago have greater antiquity, diverging in the Miocene. Species age is not related to range size as a simple positive linear function and interpreting the precise tempo of evolution in this genus is greatly complicated by morphological homoplasy and a sparse fossil record. Our phylogenetic reconstructions provide new examples of how morphology conceals cryptic evolutionary relationships in the genus Acropora, and offers limited support for the species groupings currently used in Acropora systematics. We hypothesize that in addition to age, other mechanisms (such as a reticulate ancestry) delimit the contemporary range of some Acropora species, as evidenced by the complex patterns of allele sharing and paraphyly we uncover. Overall, both new and ancient evolutionary information may be lost if geographically restricted and threatened Acropora species are forced to extinction. In order to more adequately protect Acropora biodiversity and resolve the evolutionary history of Acropora, further analyses based on comprehensive and heterogeneous morphological and molecular data utilizing reticulate models of evolution are needed. Summary: A pair of Island Monarchs Monarcha cinerascens, Temminck 1827, was seen on 15 October 2010 on Cassini Island, Kimberley coast, Western Australia. The birds were watched for 4 minutes as they interacted in dry vine forest, and digital photographs were obtained. This record has been accepted by the Birds Australia Rarities Committee (Case no. 657) as the first record of the species close to mainland Australia.

Island Monarch Monarcha cinerascens: First Record on an Island close to Mainland Australia [260.31 kb] - please note, this is a PDF from a 3rd party site, thus no full-text version or accessible alternative is available. 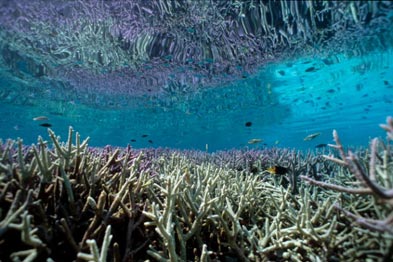