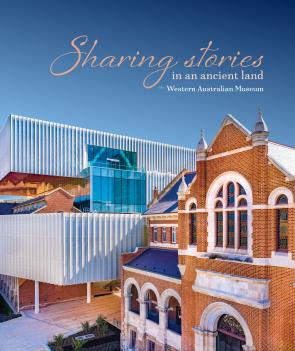 Sharing Stories in an Ancient Land: The Western Australian Museum

Sharing Stories in an Ancient Land: The Western Australian Museum has been published to coincide with the opening of the glorious WA Museum Boola Bardip. The original site of the Museum, established about 130 years ago, has been transformed by marrying the heritage buildings with an epic modern structure.

Museums often tell stories from their public-facing galleries; this book uncovers and shares the work in the background that goes into the collections and exhibitions. Inside are stories about the research work that supports the Museum’s charter to cherish and protect the richness of the land, sky and sea of Western Australia for its citizens. WA Museum Boola Bardip is for all the people of this state: the Traditional Owners with their ongoing cultural connections to Country, stretching back for tens of thousands of years, and the settlers, the migrants, and all of the people who have made Western Australia their home and determined its future.

This new central home is but one part of the complex of the Western Australian Museum, featuring multiple locations, online portals, and collections of more than eight million objects. Some objects offer entry points into deep time, as evidence from the very beginning of the universe. Sharing Stories in an Ancient Land tells the story of the pursuit of knowledge about the natural and human-centred worlds. Many voices are contained in these pages from the generations of professionals and enthusiasts who have carried on the bold and ambitious spirit with which the Museum was established.