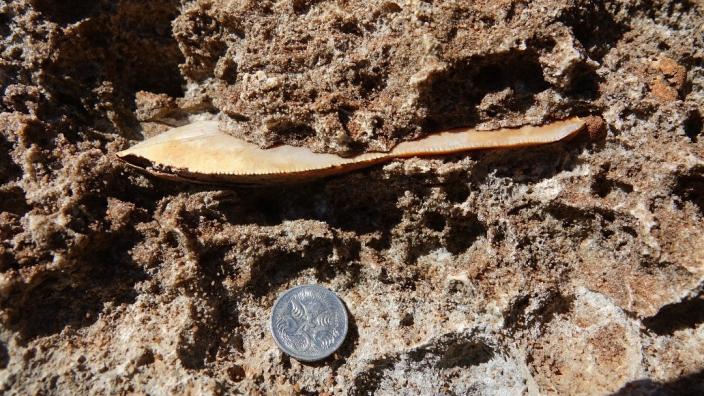 Cape Range National Park near Exmouth was once a feeding ground for some of the largest prehistoric predators that ever lived in Earth’s oceans.

Western Australian Museum scientists made the discovery when they uncovered 38 teeth belonging to Carcharocles megalodon, a prehistoric shark that research suggests grew to between 15 and 19 metres in length.

The latest research indicates that megalodon went extinct around 3.5 million years ago. It was traditionally viewed as a giant, close relative of the white shark but most researchers now believe the two are only distantly related.

The fossil teeth were discovered in mid-2019 by a team of palaeontologists and volunteers led by Dr Mikael Siversson, Head of Earth and Planetary Sciences at the WA Museum. The team was joined by staff from the Exmouth Parks and Wildlife Service.

“We were stunned by the abundance of megalodon teeth,” Dr Siversson said. “Equally we were also surprised we didn’t really find any teeth of early forms of the white shark lineage, which are commonly found in marine rocks of this age.”

He said the sizes of the teeth indicate the elevated Cape Range National Park area was once a submerged prehistoric feeding ground rather than a nursey, as most teeth would have come from huge sharks measuring 10 – 15 metres in length.

“Given the rock containing the teeth was formed in fairly shallow water it is possible that these giant sharks were attracted to the area to feed on migrating baleen whales,” he said.

The best preserved 11 teeth of Carcharocles megalodon and several teeth of the other species of sharks were cut from hard limestone rock inside the park.

They are now being carefully extracted from the rock in a process that will take around one year. Museum staff use buffered acetic acid to slowly dissolve the rock around teeth.

Dr Siversson said the find is an opportunity to remind the public that collecting fossils within the national park is prohibited without permits.

The story of megalodon sharks will be shared in the New Museum in 2020 in the Wild Life gallery which explores the State’s biodiversity.

Mikael Siversson was the recipient of one of the Foundation for the WA Museum’s Annual Minderoo Grants in 2019.