Bush Mechanics on the road to the Museum of the Goldfields 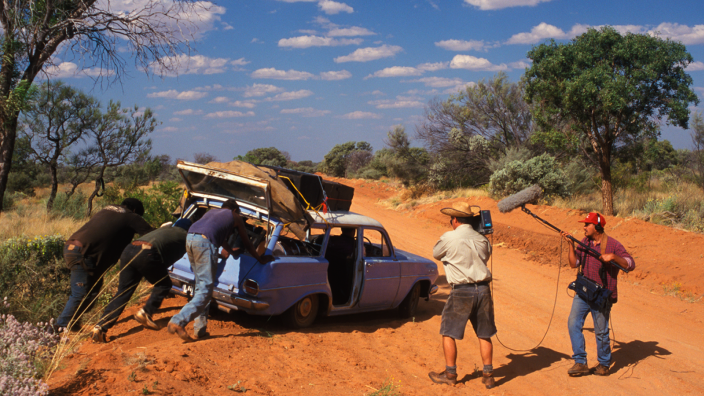 An exhibition showcasing the creativity of bush mechanics and their inventive repair techniques will open at the Museum of the Goldfields on Saturday 24 September.

The Bush Mechanics exhibition is based on the incredibly popular ABC television series of the same name, co-created by David Batty and Francis Jupurrurla Kelly.

Through the show’s distinctive brand of humour, this exhibition showcases the ingenuity of outback mechanics whose clever resourcefulness can turn branches, spinifex and sand into tools and spare parts to get cars back on the road.

Museum of the Goldfields Regional Manager, Marta Perona said Bush Mechanics has a wide-ranging appeal as the multi-media exhibition has something for every curious mind.

“The exhibition features items from the show including two original cars, clay figurines, and specially commissioned artwork that captures the energetic tone of the series,”

“The Museum will also be delivering an extensive program of events that ties in with the exhibition for the local Goldfields community.” Ms Perona said.

Visitors can become bush mechanics themselves and try their hand at the nyurulypa, or tricks seen on the show through engaging inventions and interactives on display.

Bush Mechanics also provides insights into the life and culture of the Warlpiri people of Central Australia.

National Motor Museum Senior Curator, Mick Bolognese said that although over 20 years have passed since the original Bush Mechanics TV series debuted on screen, it is still a hit with modern audiences.

“Like the TV series, the exhibition provides insight into the important role that cars played – and continue to play – in Aboriginal life in Central Australia,”

“People love seeing the ingenious and hilarious fixes that the Bush Mechanics applied to their old Fords and Holdens, but they’re also getting a personal and sometimes touching look at life in a remote community in the Central Desert.” Mr Bolognese said.

This exhibition has been developed by the National Motor Museum, a museum of the History Trust of South Australia, in conjunction with Pintubi Anmatjere Warlpiri (PAW) Media. This project has been assisted by the Australian Government’s Visions of Australia program.

Bush Mechanics is a free exhibition and is on display at the Museum of the Goldfields from Saturday 24 September 2022 to Sunday 12 February 2023.