132 year old message in a bottle found on WA beach 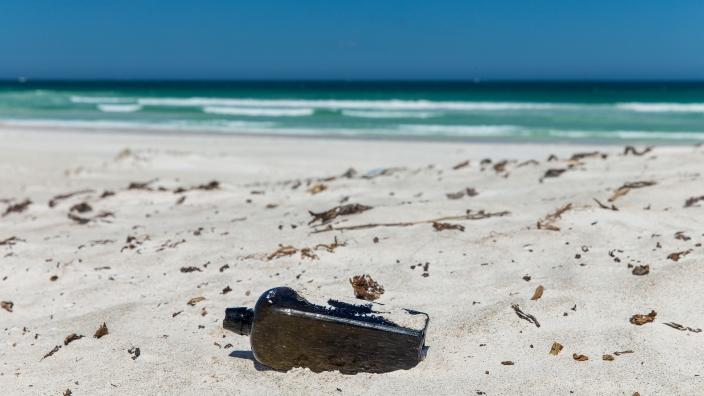 The world’s oldest known message in a bottle has been found half-buried at a West Australian beach nearly 132 years after it was tossed overboard in the Indian Ocean, 950km from the coast.

Until now, the previous world record for the oldest message in a bottle was 108 years, four months and 18 days between jettison and discovery.

The message is dated 12 June 1886 and was jettisoned from the German sailing barque Paula as part of a long-term German oceanographic experiment to better understand global ocean currents and find faster, more efficient shipping routes.

The bottle was found just north of Wedge Island, 180km north of Perth, by Tonya Illman near her son’s car which had become bogged in the soft sand. Researchers believe the bottle and message probably washed up there within a year of being jettisoned but lay buried in a layer of damp sand which helped preserve it, until a storm surge or similar weather event uncovered it more than a century later.

“My friend Grace Ricciardo and I were walking across the dunes when I saw something sticking out of the sand so I went to take a closer look,” Mrs Illman said.

“It just looked like a lovely old bottle so I picked it up thinking it might look good in my bookcase. My son’s girlfriend was the one who discovered the note when she went to tip the sand out. The note was damp, rolled tightly and wrapped with string. We took it home and dried it out, and when we opened it we saw it was a printed form, in German, with very faint German handwriting on it.”

Tonya’s husband Kym then spent some time researching it online and discovered their find appeared to be part of an official drift bottle experiment conducted by what was then known as the Deutsche Seewarte, or German Naval Observatory. From 1864 until 1933, thousands of bottles were thrown into the world’s oceans from German ships, each containing a form on which the captain would write the date it was jettisoned, the exact coordinates at the time, the name of the ship, its home port and travel route. On the back, it asked the finder to write when and where the bottle had been found and return it, either to the German Naval Observatory in Hamburg or the nearest German Consulate.

“After much digging, we were able to make out the date, the coordinates, the ship’s name and direction of the voyage (Cardiff in Wales to Makassar in the Dutch East Indies, now Indonesia),” Mr Illman said.

“It was clearly very exciting but we needed a lot more information. We wanted to know if what we had found was historically significant or a very inventive hoax.”

The Illmans brought their find to the Western Australian Museum. Initial investigations established the bottle was a mid to late 19th century Dutch gin bottle; the paper and colouration were consistent with cheaply-made 19th century paper; and the German bark Paula did indeed sail from Cardiff to Makassar in 1886. But it wasn’t enough to confirm the historic find.

“Extraordinary finds need extraordinary evidence to support them, so we contacted colleagues in the Netherlands and Germany for help to find more information,” said Dr Ross Anderson, Assistant Curator Maritime Archaeology at the WA Museum.

“Incredibly, an archival search in Germany found Paula’s original Meteorological Journal and there was an entry for 12 June 1886 made by the captain, recording a drift bottle having been thrown overboard. The date and the coordinates correspond exactly with those on the bottle message.

“A handwriting comparison of the bottle message signed by the captain and Paula’s Meteorological Journal, shows the handwriting is identical in terms of cursive style, slant, font, spacing, stroke emphasis, capitalisation and numbering style. Comparison of the original message slips that had been returned for the year 1886 also confirms the type of message, wording and print layout is identical to the one discovered at Wedge Island in January,” Dr Anderson said.

The find has been determined to be authentic by the German Federal Maritime and Hydrographic Agency (BSH) and National Meteorological Service of the Federal Republic of Germany (DWD), both offshoots of the German Naval Observatory responsible for the original drift bottle research, and the Western Australian Museum.

“The knowledge about the ejection of a bottle post with exactly this data about ship, route and exact date would be available only through the access to various historical sources. However, these sources are not easily accessible to the public. This makes a fake in terms of content extremely unlikely,” a report from the BSH said.

“The appearance of the form from the bottle found is exactly the same as that of other forms from the year 1886, which were sent back in the following years to the German Seewarte and are available to us in the original. The forms have changed a lot over the years, but in the 1886 period the form is exactly what you have.”

Of the thousands of bottles thrown overboard during the 69-year-long experiment, only 662 message slips were returned to Hamburg and none of the bottles. The Wedge Island find takes that total to 663, and is the only known example of the type of bottle used.  The last bottle and note to be found was on 7 January 1934 in Denmark.

Kym and Tonya Illman have generously loaned their find to the Western Australian Museum to display for the next two years. The message, bottle and this incredible story will be on display at the WA Maritime Museum in Fremantle from tomorrow.

Minister for Culture and the Arts David Templeman today thanked the Illmans for sharing their find with the people of Western Australia.

“We are delighted that Kym and Tonya have loaned the Western Australian Museum such an incredible part of the very significant maritime history WA shares with the rest of the world,” Mr Templeman said.

“I would also like to congratulate everyone involved in piecing together the extraordinary story behind this message in a bottle discovery. It is truly an impressive find and thanks to the wonderful international and interdisciplinary cooperation of science and research, it can now also be shared with the world.”

The Western Australian Museum’s report on the bottle’s discovery and authentication can be found on the Museum’s website here http://museum.wa.gov.au/maritime-archaeology-db/paula-1886-message-in-a-bottle