An online, full text version of this document is now available

The Aborigines in the South-West ofWestern Australia, in common with Aborigines in other parts of Australia, were hunters and gatherers. Like them they neither reared domestic animals nor cultivated crops, and were dependent on the environment for their food supply, moving from place to place within defined areas as the availability of food and the seasons dictated.

From our present knowledge of the fauna and flora of the south-west area of Western Australia, the sources of food most readily available to the Aborigines would have been mammals, birds and their eggs, most reptiles, some frogs, fish (where there was adequate water, especially in marine inlets) and some invertebrates (e.g. larvae of beetles), but most invertebrates seem to be unpalatable. As far as it is known the plant species available for food did not lend themselves to cultivation and no crops were grown. Seeds, fruits and roots of various sorts were gathered.

Few observers, apart from Nind (1831, p. 36), make positive statements on the division of labour between the sexes of their hunting and gathering activities, but from their descriptions it is reasonable to infer that the men were the hunters, they procured the larger animals, in particular kangaroos and emus, while the women were the gatherers, they collected seeds, dug for roots, and caught some of the smaller animals; but it is known that men also caught smaller animals and gathered roots. A further inference as to this division of labour can be drawn from the distribution between them of their implements; spears, axes, throwing-sticks or clubs, and boomerangs belonged to and were used by the men, while the women's main implement was the digging-stick.

The men and women usually went about their hunting and gathering activities independently; however, there were some of these, such as fishing, or catching animals by setting fire to the bush, in which they all took part.

By comparison with native peoples of most continents the Australian Aboriginal had access to relatively few major sources of animal protein, because, despite the appearances of the above list, mammals, with the exception of the great kangaroos, were mostly small, and the major protein sources available to man elsewhere in the world, which are provided by the ungulates (e.g. sheep, cattle, antelopes, deer, horses, etc.), are lacking in Australia (Ride 1971, p. 5).

Large mammals may once have been available to Aboriginal man in Australia because large marsupials of the families Diprotodontidae and Sthenuridae certainly occurred in Australia in Aboriginal times (Merrilees 1968, p. 1) and would almost certainly have provided a major food source.

It is one thing to go through the lists of the species of fauna and flora and say what could be eaten by man; it is quite another thing to be sure that the species were in sufficient numbers to be a recognized source of food, or that the Aborigines had techniques which were adequate to take and use them.

The object of this paper is to discover from records of explorers and early settlers, tradition, and archaeological data, which of these food sources were utilized and what techniques were employed in taking and using them. A list of animal foods, mostly from literature sources, is given in Appendix 1; it is arranged in alphabetical order of Aboriginal names. Where these have been identified to species, the identification is included. The same species are arranged in alphabetical order of scientific names grouped according to major zoological taxa, e.g., mammals, birds, etc., in Appendix 2. 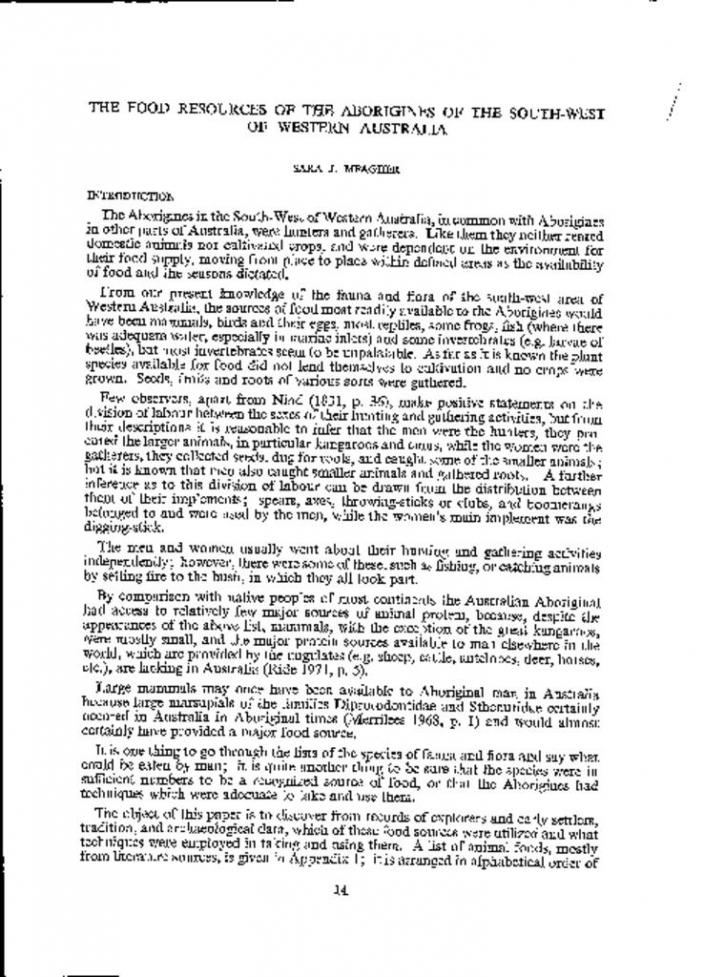