Explore our beautiful heritage buildings and celebrate some of Perth’s rich architecture, history and culture. 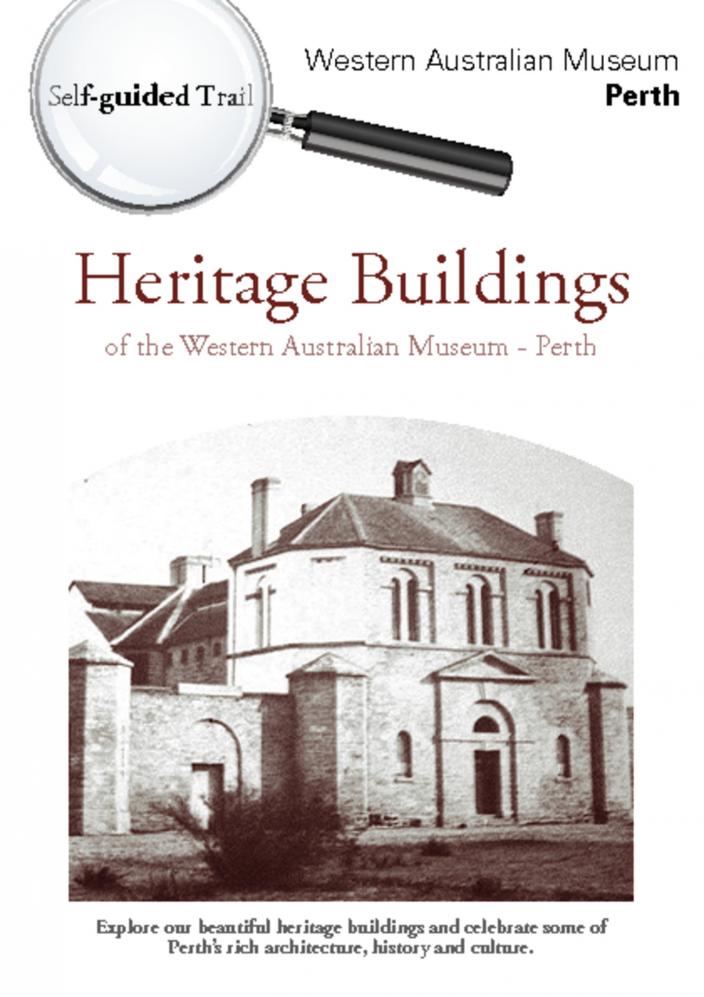 Explore our beautiful heritage buildings and celebrate some of Perth’s rich architecture, history and culture.

Begin outside at the entrance to the Museum.

The gold rushes of the 1890s brought new prosperity to Western Australia, allowing the construction of major public buildings such as those you see here.

The building to your left is Hackett Hall, which was the reading room for the State Library between 1913 and 1984. Western Australian stone and timbers were used, as well as locally manufactured materials – from the stamped tin ceilings and ornamental friezes to the massive brackets supporting the galleries. Be sure to look out for these when you go inside.

The building to your right is the Jubilee Building. It opened in 1899 and was built to house Perth’s combined art gallery, library and museum. Designed in Victorian Byzantine style, the arches and supporting columns are Rottnest sandstone, while the foundations and basement are Cottesloe sandstone. The granite steps came from Meckering and the red bricks were produced locally.

There was some criticism at the time regarding the cost of the project. The inclusion of the stone arcade on the south elevation along James Street was seen as an unnecessary expense given that the sun does not fall there. This open arcade surrounding the building was eventually enclosed in 1954.

The original James Street entrance to the building can be seen at the top of the old flight of stairs. Inside the Museum you can still see the original entrance doors.

Enter the Museum and pause in the light-filled foyer.

This imposing entrance was constructed in 1999 to link Hackett Hall and the Jubilee Building, a previously unattainable feat. Due to a falling out between the architects responsible for these two buildings, the structures were built deliberately off centre to each other. Th is can be seen in the different floor entry levels and alignment of the two buildings. Modern architects eventually found a design that enabled integration of these buildings.

Take the lift to Level 2 of Hackett Hall and enter the mezzanine level, overlooking the gallery.

Th e interior of Hackett Hall is typical of many public buildings from the time of federation until the First World War. Pressed metal patterns for the roof and walls, ornate staircases, dumb waiter lifts, skylights and cast iron spiral staircases make Hackett Hall one of the Museum’s standout buildings. Th e upper levels still look very much like a library, complete with many of the original bookcases, and major interior restoration work in 1996 recreated what it would have looked like almost a century ago. Many people still have memories of the library during its heyday, and how for years, patrons had to stand at tables as they read their book in strictly enforced silence.

Leave Hackett Hall and walk across the suspended walkway to the Diamonds to Dinosaurs gallery.

The upper level of the Jubilee Building was originally the Art Gallery until 1908. Walk through this gallery until you reach the staircase at the other end, and make your way down the stairs to the landing outside of the Katta Djinoong gallery.

Take note of the Woodward Diorama of wetlands flora and fauna which was originally housed in the Jubilee Building. Created in 1903, it was considered very progressive at the time as it presented native fauna in a ‘natural’ setting. Compare this to the display methods used in the Mammal Gallery downstairs.

Th is building was the Art Gallery of Western Australia from 1908 to 1979. T e grand entrance from Beaufort Street would take visitors from the statue gallery on the ground floor then up an impressive staircase to the Hellenic Gallery where the paintings were displayed.

The Katta Djinoong gallery (formerly the Hellenic Gallery) still has a classical Greek relief running around the top of the gallery walls. Th is is one of the world’s best quality casts of the Elgin Marbles, which were taken from the Parthenon in Athens and are now held in the British Museum.

Make your way down the staircase to the Mammal Gallery in the Jubilee Building.

This building houses two of our most popular galleries, Diamonds to Dinosaurs upstairs and the Mammal Gallery downstairs. Many of the display cases and specimens in the Mammal Gallery date back to the 1890s and 1900s when the Museum was still young.

A good example is the Bison which was purchased for 30 pounds in 1899 and has been an icon of the Museum ever since.

Walk down the Butterfly Gallery hallway to see the original entry doors to this building.

Walk down the stairs in the Beaufort Street Building and head out to the Old Perth Gaol.

The Old Perth Gaol, built by convicts between 1855 and 1856, is one of the oldest buildings still standing in Western Australia. You are facing the original entrance to the gaol, which shows its classic Georgian style architecture.

Both male and female convicts were incarcerated, but were kept strictly segregated. Three levels held the cell blocks, with the basement being used as a bakery and kitchen. The gaol was operational from 1856. In 1886 authorities closed the gaol and relocated prisoners to Fremantle, and in 1891 the Old Perth Gaol began its new life as part of the Western Australian Museum.

Enter the Old Perth Gaol through the Georgian entrance to learn more about the history of the building.

Walk around the Gaol until you find the red post box.

Explore the courtyard areas outside the Old Perth Gaol, and view the 1976 restorations to the exterior of the gaol. Th e interior of the rest of the building has been modifi ed over time in line with its new use, including demolishing three tiers of cells and lowering the roof, so very few features of the original gaol remain. Take a walk through the gaol and see if you can identify any authentic remains of its penitentiary past.

Locate the small cottage in the courtyard.

This small cottage was built in 1863 by local builder Charles King, and originally stood at the corner of Roe and Lake Streets in Northbridge. Th is building is important as it is one of the few buildings from the period to have survived. Most homes for Perth’s citizens were made of bark, wattle and daub, or timber. When developers wanted its original site cleared in the late 1980s, the home was dismantled and put into storage before being re-erected on this site in 1991. It is an accurate reproduction of what a colonists’ house looked like in the mid 19th century. Note the wooden shingles on the roof, and the decorative brick laying styles on the front and sides of the cottage.

Find the very old grapevine nearby.

This grapevine was planted in the late 1850s, and is thought to be one of the oldest in Western Australia. It can clearly be seen in the photo on the wall, which was taken in 1890. Notice how the Gaol and the surrounding landscape has changed since the photo was taken.

Nearby is the rear entrance of the Gaol. Th e door with a peep hole on the left was a solitary confinement cell.

Walk through the arched gateway towards the Museum foyer.

Just before you walk through the glass doors into the foyer, pause to look down the side of the building to your left, to where you can see another gate. Th is area is the location of what used to be the execution yard of the Old Perth Gaol, long before these other buildings existed. At this spot, 30 people were hanged for their crimes. The first execution took place in 1855. They were often very public, with newspapers of the time reporting that women and children were among the spectators at these events. Later, the front and sides of the scaff old were boarded in as citizens complained that they could not avoid seeing the executions as the prison was built on high ground.

Th is concludes your tour. We hope that you have enjoyed learning more about the heritage buildings of the Western Australian Museum – Perth.