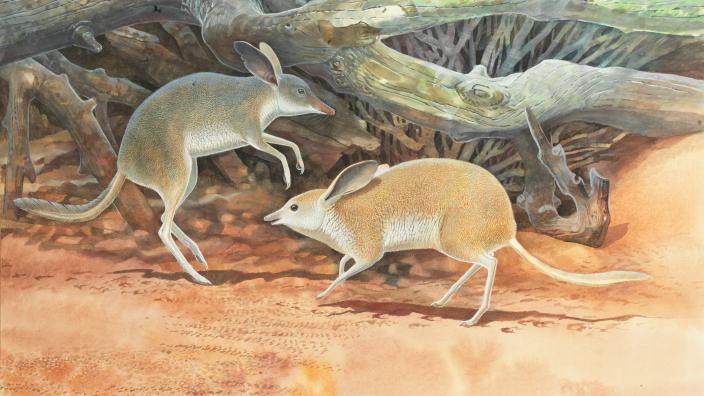 A team of researchers led by the Western Australian Museum and the Natural History Museum in London has discovered a new species of very small, incredibly fast extinct Australian Pig-footed Bandicoot.

Dr Kenny Travouillon, Curator of Mammalogy at the WA Museum, said the discovery of Chaeropus yirratji is a breakthrough for science as little was known about the mammal previously.

“The Pig-footed Bandicoot was one of the most unique, and possibly one of the weirdest animals on the planet. No other mammal walked on two toes on its front legs and one toe on its hind legs. They were believed to be amongst the smallest grazing mammals that have ever lived and their speed, for their size, was legendary.”

The new species was discovered during research into the 29 specimens of Pig-footed Bandicoot held in museums across the world. Scientists had thought all the specimens were of the same species, Chaeropus ecaudatus. By using a combination of traditional morphology, morphometrics, palaeontology and molecular phylogenetics, they discovered there were in fact two different species.

DNA from specimens collected by Sir Thomas Mitchell in 1846 confirmed the existence of two species not only morphologically, but genetically.

“Although very similar, the two species have some distinct differences,” Dr Travouillon said.

Researchers also used fossil records and Aboriginal oral accounts recorded in the 1980s to trace the two species’ distribution. Chaeropus yirratji was thought to have lived in sandy environments in central Australia and Chaeropus ecaudatus lived in the southern peripheral areas of the arid zone of Australia. Both species were thought to inhabit areas of Western Australia.

Dr. Travouillon said uncovering the history of each of the 29 specimens was fascinating and led to identifying the first specimen of Chaeropus yirratji ever collected.

“The specimen on display in the Natural History Museum in Paris was the most challenging specimen to trace. All we knew was that it was donated by John Gould in 1853. After some research we found out it was collected by Charles Sturt when he went on the very first expedition into central Australia in 1845. It was the first specimen of Chaeropus yirratji ever collected and it’s prepared exactly as Sturt describes in his travel journal, resting on its hind legs.”

“Using a combination of historical research, new techniques and museum specimens from around the world has allowed us to identify and learn more about this recently extinct species. Collections like that of the Natural History Museum are fundamental to increase our understanding of present and past biodiversity on Earth,” Mr Miguez said.

“While knowledge of this new species arrives too late to save it from extinction, hopefully the lesson learnt demonstrates the urgency and importance of supporting biodiversity research.”

“The Pig-footed Bandicoot is one of more than 30 mammal species that have gone extinct in Australia since European colonisation. By conducting this research and identifying new species we’re able to better understand the impact of our actions so we can prevent the extinction of more amazing animals in the future.”

The first species of Pig-footed Bandicoot described, Chaeropus ecaudatus, is an arid-adapted bandicoot which evolved along with bilbies and other bandicoots more than 20 million years ago. The species was named in 1838 based on a specimen found without a tail from the Murray River in New South Wales.

The paper Hidden in Plain Sight: Reassessment of the Pig-footed Bandicoot, Chaeropus ecaudatus (Peramelemorphia, Chaeropodidae), With a Description of a New Species From Central Australia, and Use of the Fossil Record to Trace Its Past Distribution was possible through collaboration between the WA Museum, Natural History Museum, University of Bristol, University of Adelaide, South Australian Museum, University of Queensland, and Griffith University. The paper was published in Zootaxa and can be viewed here https://www.mapress.com/j/zt/article/view/zootaxa.4566.1.1