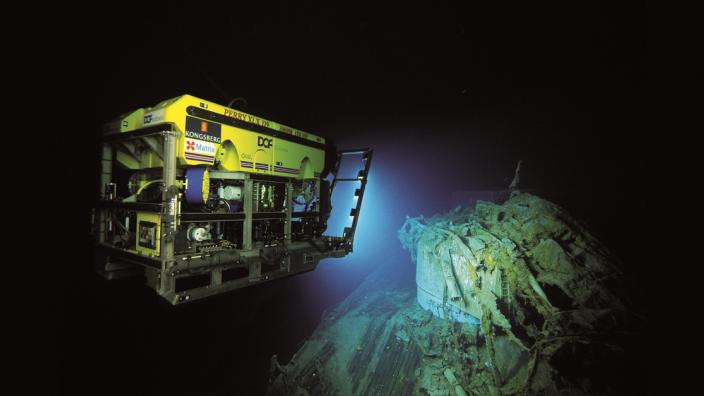 For more than 66 years the wrecks of two ships destroyed in what is still Australia’s worst ever naval disaster sat silently on the ocean floor, their location a mystery.

HMAS Sydney II and the German raider HSK Kormoran both sank after a short, fierce battle in November 1941. 81 men from Kormoran died. All 645 men on Sydney were lost.

Located in 2008, 200km west of Shark Bay and 2,500m deep, the wrecks’ discovery and inspection helped shed light on one of Australia’s most enduring maritime mysteries. Now protected under Commonwealth law, the wrecks are on the National and Commonwealth Heritage Lists.

In 2015 the Western Australian Museum and Curtin University, with vital assistance from DOF Subsea, the Commonwealth Government and other supporters, returned to the wrecks and captured stunning underwater images that revealed much about the fate of the ships on the seabed.

Deep Light, Illuminating the wrecks of Sydney and Kormoran is an extraordinary exhibition featuring remarkable images taken during that expedition, interviews with researchers and the families of those who were lost, and a moving 3D film of the sites, From Great Depths.

“The wreck sites of Sydney and Kormoran have a special association with the Australian community,” Museum of the Goldfields Regional Manager Cara Haymes said.

“This is especially true for the family and friends of all of the men who were lost, as these sites are their final resting places.

“So far beneath the waves the ocean is pitch black. The technology used to capture these images allows us to reflect on the devastation caused by war, but also to see the wonderous, colourful creatures that now inhabit the rusting remains of these ships.”

Deep Light opens at the Museum of the Goldfields this Saturday 26 October, and is on display until 29 March, 2020. Entry to this exhibition is free. Deep Light is available for education group bookings during the school term with learning resources available for Term 1, 2020. More information at http://museum.wa.gov.au/museums/museum-of-the-goldfields/deep-light-illuminating-wrecks-sydney-and-kormoran