Researchers count 13 new species of fanged arachnids in the Pilbara 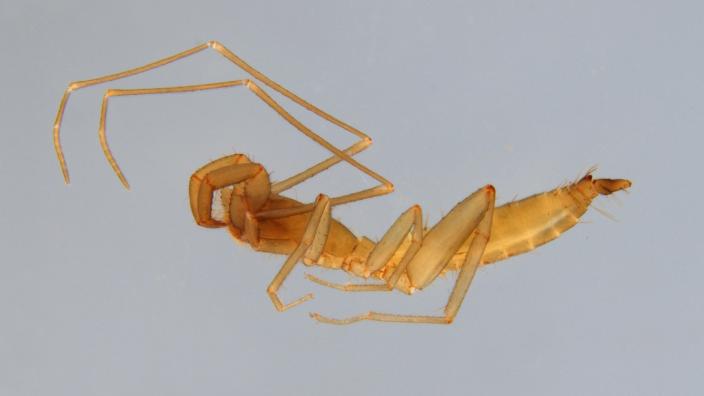 Researchers from the Western Australian Museum and The University of Western Australian have discovered 13 new species of the elusive ‘spricket’ in Australia’s north-west, a creature that looks like a cross between a spider and a cricket and is only around 3mm long and 0.5mm wide.

The new species belong to the genus Draculoides, named after Bram Stoker’s Dracula for their fang-like teeth, pale appearance, and predatory behaviour. The species’ names relate to famous vampire characters such as Draculoides akashae, named for the queen of the vampires in Anne Rice’s novels, and Draculoides belalugosii for actor Bela Lugosi who played Dracula in the movie Dracula.

There are approximately 400 species of sprickets worldwide, belonging to the order Schizomida, and are distant relatives of more familiar arachnids such as spiders and scorpions. The sprickets live their entire lives in underground habitats such as caves and small spaces in rock formations in the Pilbara. They do not have eyes and are pale with almost no pigment, which are adaptations of living in permanently dark environments.

“These animals are the top predators in their habitats. They use their forearms to grasp prey smaller than them such as slaters, millipedes, cockroaches and worms, and crush them in their fang-like mouthparts,” Dr Abrams said. “Because they have no eyes, they tap around their environment with their extra-long antenna-like legs and quickly attack when they find prey.

“Although they are fierce hunters and may look scary to some, they are tiny and completely harmless to humans. They also have a softer side. For example, a female spricket will build a little brood chamber to lay her eggs in and, after they hatch, will carry the babies on her back until they are ready to disperse.

“They also have an interesting courtship ritual where the female holds the male’s tail in her mouth, and he then leads her around. We don’t know how they find each other in the dark, but it’s possible that the female can recognise a male of the same species because it has a uniquely shaped tail.”

Dr Abrams said not a lot was understood about the new species because they inhabited remote parts of the Pilbara and had very small ranges, making it hard to find and observe how they lived in their subterranean environments.

“There are definitely more new species out there, but they are difficult to find,” Dr Abrams said.

Western Australia is a globally recognised hotspot for unusual subterranean creatures, known as stygofauna and troglofauna, with many of the estimated 4000 different species found in the Pilbara and Yilgarn regions of the State.

A 3D model of the elusive spricket is showcased in the Wild Life gallery of the new WA Museum Boola Bardip, which opens on 21 November 2020.

The paper describing the 13 new species has been published in Zootaxa and can be viewed here. View the video of Dr Abrams discussing the new species here.