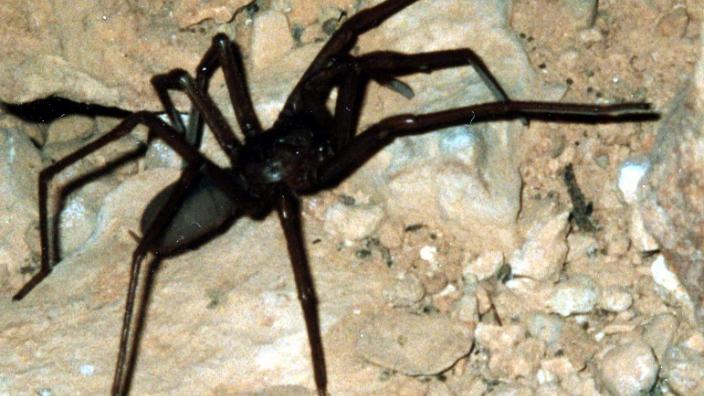 New species of the world’s most specialised cave-dwelling trapdoor spider, Troglodiplura, have been named in honour of key people involved in the 2018 Thai cave rescue.

Four new species of the rare, blind, cave-dwelling spiders found only in permanently dark zones in caves of Australia’s Nullarbor Plain have been named and published by Western Australian Museum scientists.

WA Museum lead scientist Dr Mark Harvey said he and his team wanted to pay tribute to the key people involved in the Thai cave rescue and named the new species in their honour.

“Troglodiplura beirutpakbarai was named for Mr Beirut Pakbara and Troglodiplura samankunani for Mr Saman Kunan, who both tragically died as a result of the rescue,” Dr Harvey said.

“Troglodiplura challeni is named for Dr Craig Challen and Troglodiplura harrisi for Dr Richard Harris, the Australian cave divers who were instrumental in rescuing the group.

“Both are active explorers of cave ecosystems in Australia and are passionate about their conservation.”

Dr Challen and Dr Harris were joint winners of the 2019 Australian of the Year.

Dr Harvey said the research team reviewed specimens preserved in Australian museums in the process of identifying the species and were excited by the unexpected results.

“The study revealed that in addition to Troglodiplura lowryi, the only previously named species, four new species were found.

“Earlier scientific papers suggest that Troglodiplura spiders are most closely related to a family of South American spiders. However, using DNA extracted from a museum specimen, it was evident that the genus belongs to a family of spiders found only in Australia - which has far-reaching and positive implications about their evolution.”

Dr Harvey said the research indicated that Troglodiplura belongs to the Anamidae, a family of Australian mygalomorph spiders (a group of spiders that feature fangs that point straight down, such as tarantulas and trapdoor spiders).

“Very few mygalomorph spiders have evolved into living an isolated existence in subterranean habitats. Yet our research has shown all four of the new species have developed extreme troglobitic characteristics, including the complete lack of eyes and elongated legs – making them arguably one of the world’s most specialized cave-dwelling mygalomorph.”

“Each of the species occur in single caves on the Nullarbor Plain and each are extremely rare. Nearly all specimens in museum collections are only known from fragments of cuticle painstakingly collected by cave biologists,” said Dr Harvey.

“Conserving the caves is the only way to conserve these ancient irreplaceable spiders.”

The publication naming the new species of Troglodiplura can be viewed by copying this link https://doi.org/10.1071/IS20034