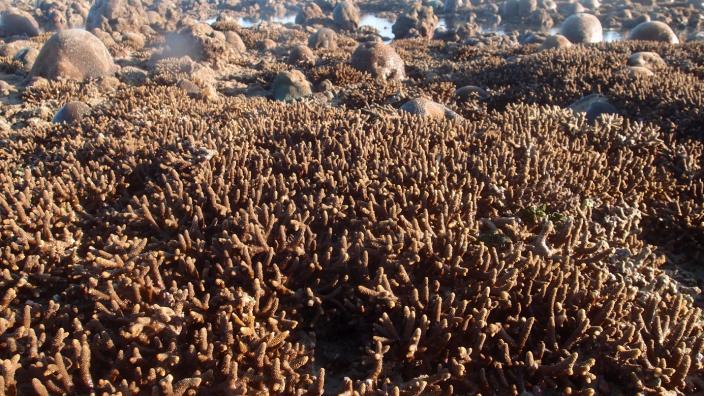 Only six months after one of the worst summers in history for coral bleaching, a new coral reef biodiversity and health survey suggests some of Australia’s most biologically important fringing reef communities in the central Kimberley remain intact.

A team of Western Australian Museum and Curtin University researchers accompanied by Wunambal Gaambera Aboriginal Corporation's Uunguu Rangers have just returned from a seven-day survey of coral reefs in the Bonaparte Archipelago.

The status of benthic organisms that have been known to bleach, including corals, sponges and giant clams, was determined at six submerged and six intertidal sites in the inshore central Kimberley region. This area is renowned for its extraordinarily diverse intertidal coral community.

Dr Zoe Richards, a research fellow with Curtin’s Department of Environment and Agriculture, who also works for the WA Museum, and was co-leader of the Museum’s Aquatic Zoology research team, reports that there was little evidence to suggest the 2015/2016 bleaching event impacted these remote but nationally significant reefs.

“While corals growing near Broome and the Dampier Peninsula in the southern Kimberley were impacted by the El Niño induced coral bleaching, in the central Kimberley study area the corals and other benthic animals were visibly healthy in both subtidal and intertidal reef zones and only isolated cases of recent coral mortality were observed,” Dr Richards said.

Although the diversity and abundance of corals in the Maret and Montalivet Island groups remained high, as has been recorded on previous surveys, one notable difference was the presence of crown-of-thorns seastars in both intertidal and submerged reef zones.

“The crown-of-thorns seastar is native to coral reefs in the Indo-Pacific region, so its presence in the Kimberley in low numbers is not alarming,” expedition co-leader WA Museum molecular systematist Dr Nerida Wilson said.

Nevertheless, because these coral eating predators have not been recorded on previous WA Museum surveys in the region, and given crown-of-thorns seastars have recently devastated some reefs in the Pilbara, the Museum researchers recommend continued surveillance of the occurrence of this coral-eating predator in future monitoring work.

The team also noted the presence of a sponge encrusting over some corals at a few sites. Dr Jane Fromont, a sponge expert from the WA Museum, is currently checking samples to confirm if this sponge is a native or introduced species.

Wunambal Gaambera Aboriginal Corporation is a research partner with the WA Museum on the project. Rangers assisted in tidal reef surveys, processing samples and provided cultural advice for visiting Country.