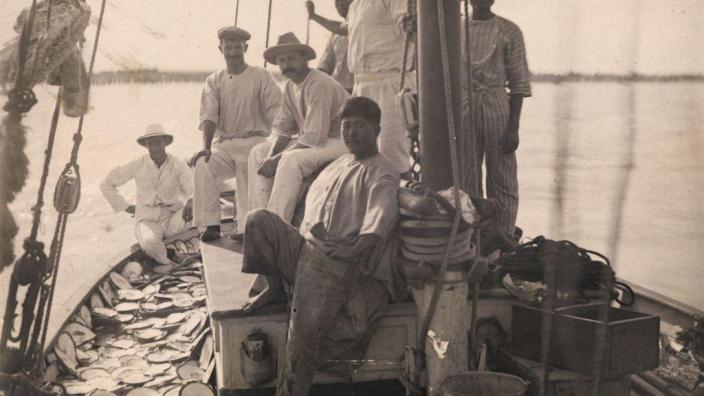 Lustre: Pearling & Australia, an exhibition showcasing the unique and important role that pearls and pearling have played in our nation’s history, returns to Western Australia for its premier regional tour opening at the Museum of the Goldfields this Saturday 25 May 2019.

Lustre is a multi-dimensional exhibition, curated in 2015 as a dynamic partnership between the WA Museum and Nyamba Buru Yawuru – the native title holders of Broome. It explores the gritty human story of pearling, weaving together intersecting trends of Aboriginal, Asian and European histories to reveal insights into one of Australia’s oldest industries.

WA Museum CEO Alec Coles said Lustre is about more than pearls, it explores the beauty, significance and intrigue of pearls and pearlshell across time and culture.

“Lustre investigates the biology and life cycle of the pearl oyster and its environment. It tells the unique Australian story of the pearlshell, intertwining ancient Aboriginal trade stories with the more recent industry development that transformed the north of Australia. It also takes us on a journey into the future of pearling and its lasting customs and legacies,” Mr Coles said.

Australian Aboriginal people were one of the first peoples to value the beauty and associated power of the pearlshell, collecting it for more than 20,000 years and decorating it with their stories, and trading it across northern Australia and into the desert.

Museum of the Goldfields Manager Cara Haymes said Lustre tells the story of pearling largely from an Aboriginal perspective.

“It pays homage to the skills of Aboriginal and Asian indentured workers, and pays tribute to many who gave their lives to the industry,” Ms Haymes said.

Featured in the exhibition is a remarkable, 2,000-year-old near-round natural pearl discovered in an historic shell midden in a rock shelter in the Admiralty Gulf, off the coast of the Kimberley region of Western Australia.

“Despite sitting in shell layer fragments for 2,000 years, this spectacular pearl has retained a beautiful colour and lustre, and must be seen to be believed,” Ms Haymes said.

Lustre was developed in close consultation with senior Yawuru, Karajarri, Bardi and Jawi, and Mayala elders from Saltwater Country, and is supported by the Visions regional touring program, an Australian Government program aiming to improve access to cultural material for all Australians. The WA Museum also received funding from the State Government to engage and train two young Yawuru people as emerging curators under the supervision of the lead curator and WA Museum staff.

An audio trail will be available at the exhibition so visitors will be able to listen to first-hand accounts from people who are integral to the pearling story.

The exhibition will be on display at the Museum of the Goldfields until Sunday 1 September.