Dinosaurs and megafauna in the limelight at Perth Concert Hall 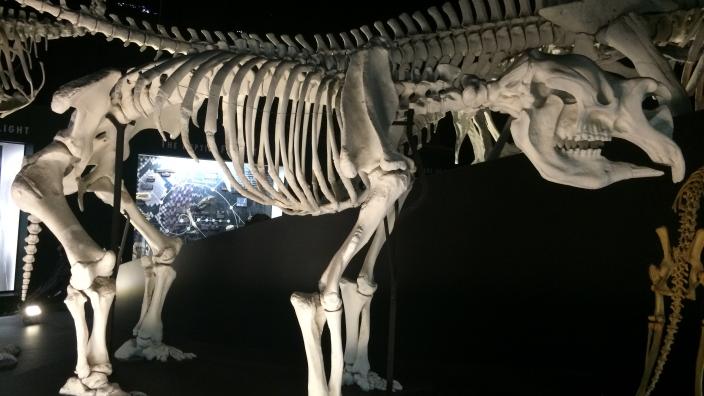 The Western Australian Museum has partnered with the Perth Concert Hall to display a selection of objects from its Earth and Planetary Sciences collection while the Museum's Perth site undergoes the biggest redevelopment in its 125-year history.

The display includes an iron meteorite found in 1917 in the Murchison region, a cast of a Muttaburrasaurus dinosaur skeleton, a model Pteranodon, and two cast skeletons of now extinct megafauna – a short-faced kangaroo and a Diprotodon, a giant marsupial closely related to modern wombats.

WA Museum CEO Alec Coles said the partnership is part of the WA Museum’s off-site activation program which will ensure a range of collections are able to be enjoyed by audiences while the New Museum is being built.

"We are delighted to exhibit some of our most popular objects in the heart of the City, so Western Australians and visitors to our State can continue to marvel at the wonder of these giant creatures that roamed the Earth millions of years ago," Mr Coles said.

The objects at the Perth Concert Hall represent the incredible geological heritage of Australia and Western Australia: from the beginnings of our Solar System with the formation of meteorites, to dinosaurs that lived more than 100 million years ago, to the relatively recent megafauna that lived up to 25,000 years ago.

“Perth Concert Hall strives to offer every single visitor a unique and memorable experience. We hope that everyone, from children and families who come to the WASO Cushion Concerts or senior citizens who attend the Morning Music Series, to the pop-concert goers will recognise and enjoy the Museum collection,” Mr Ellmer said.

“We’re really excited to have the dinosaurs and megafauna in the limelight at the Perth Concert Hall.”

The WA Museum’s Perth site is closing to the public on 18 June for four years while the State Government completes its $428.3 million redevelopment. Doors to the New Museum for Western Australia are scheduled to open in the Perth Cultural Centre in 2020.